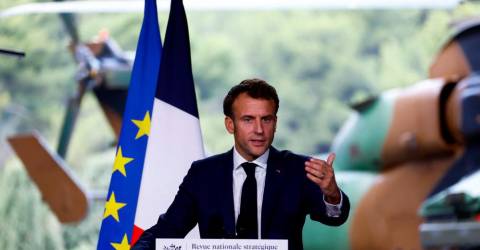 TOULON: French President Emmanuel Macron (pix) on Wednesday announced that France was ending its Barkhane anti-jihadist mission in Africa after over a decade, saying a new strategy would be worked out with African partners.

“I have decided, in coordination with our partners, to make official today the end of the Barkhane operation,“ Macron said in a keynote speech on military policy.

The move was the “consequence of what we have experienced” in recent months and a new strategy would be worked out within the next half-year, he added.

“Our military support for African countries will continue, but according to new principles that we have defined with them,“ said Macron.

He indicated that future strategy would be based on a far closer cooperation with African armies to make France’s own deployment lighter and more dynamic.

“Our engagements with our partners in Africa will be focused on a logic of cooperation and relying on their arms,“ Macron told senior armed forces members and diplomats aboard a French helicopter carrier.

French forces have faced growing hostility from some who see them as the ineffective occupying force of a former colonial power, and Macron pulled troops out of Mali this year as relations soured with the country’s military rulers.

Around 3,000 French solders remain in Burkina Faso, Chad and Niger. There are no immediate plans for a reduction in numbers.

Macron said that in the coming days exchanges would be launched with African nations and regional organisations and allies “to change the status, format and mission” of French bases in Africa.

“Our interventions should have better time limits and from the very start. We do not want to remain engaged for an unlimited time in foreign operations,“ he said.

He said the partnership should “respond to the explicit demands” made by African countries.-AFP