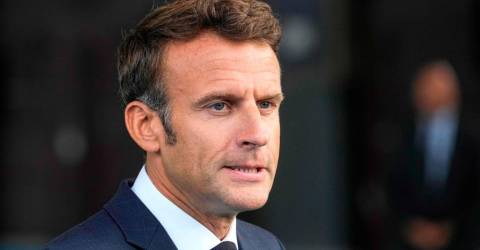 MARCOUSSIS: President Emmanuel Macron vowed Thursday to carry out a “broad national consultation” on issues ranging from education and climate change to euthanasia, some of which could eventually be put up for referendum.

Kicking off the “national refoundation council,“ Macron said a website would be set up where voters could have their say on “crucial choices,“ part of his promise to make citizens feel more involved in his government.

“In the coming weeks, we’re going to change schools, health, thanks to these exchanges across our territories, by building these road maps. So yes, it could lead to referendums,“ Macron said in the Paris suburb of Marcoussis.

But opposition parties and several unions boycotted the opening of the council and its promise of a “democratic renewal”.

Macron had announced the plans ahead of parliamentary elections last June, when his centrist party lost its majority in the National Assembly.

Alexis Corbiere of the hard-left France Unbowed party called it a “mess” aimed at “getting around parliament,“ while far-right leader Marine Le Pen denounced a “gimmick.”

“Those who don’t take part are always wrong,“ Macron said Thursday, insisting that “the door will always be open.”

Since being elected in 2017, the former investment banker has often been accused by critics of an imperious, top-down style of governing, a sentiment that helped fuel the fiery “yellow vest” protests of 2018 and 2019.

He has since promised a more inclusive administration, and the refoundation council comes after a series of “grand debates” with voters and local officials in recent years.

“We are in a historic situation,“ Macron said, citing climate change after a summer of record drought and wildfires in France, and the war in Ukraine that has sparked a surge in European energy costs.

“You won’t be able to say afterwards that we weren’t consulted, or that the process is too top-down,“ he said. – AFP