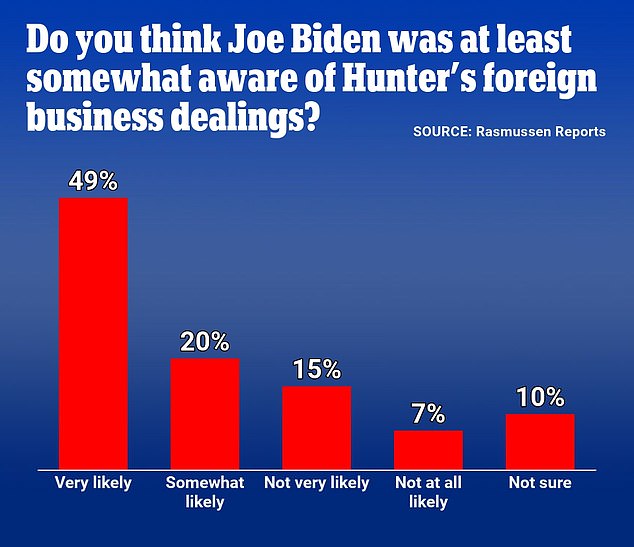 Nearly seven in 10 voters surveyed by Rasmussen Reports think that the president is at least somewhat aware of Hunter’s overseas business.

Forty-nine percent of respondents from the poll published on Tuesday think it’s ‘very likely’ Biden is aware of his son’s business despite the president’s persistent claims to the contrary.

Another 20 percent of voters polled on July 14 and 17 say it’s ‘somewhat likely’.

A combined 22 percent say that it’s either ‘not very likely’ or ‘not at all likely’ that the president knew about Hunter Biden’s business dealings in foreign countries.

Ten percent of respondents said they are still not sure what to believe on the matter.

The poll follows revelations earlier this summer from DailyMail.com of a 2018 voicemail recording from the junior Biden’s leaked harddrive where the president discussed his son’s deal with Chinese oil giant CEFC.

Reports involving Hunter are followed by two-thirds – or 66 percent – of likely U.S. voters, while the other third claim they are not following news about the president’s son. 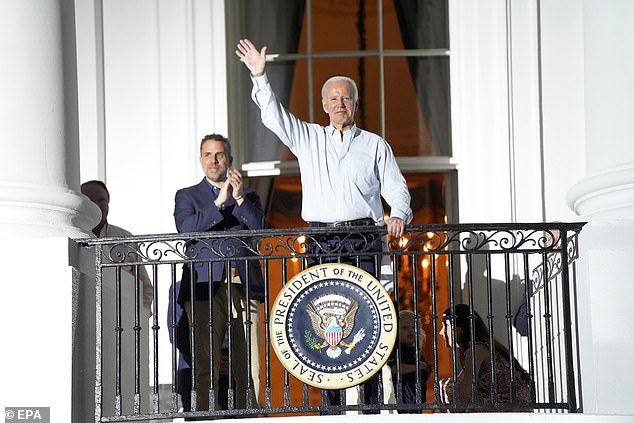 President Biden has repeatedly claimed during his 2020 presidential campaign and after taking office that he is not at all aware of or involved with the overseas business his son conducts. Pictured: Joe Biden waves to those gathered for the July 4 at the White House earlier this year as Hunter Biden (left) stands and applauds his father and the fireworks spectacle

During a July 5 White House press briefing, Biden’s spokesperson Karine Jean-Pierre refused to comment on the voicemail to reporters.

‘From this podium, I am not going to talk about alleged materials from the laptop,’ Jean-Pierre repeatedly shot back at Fox News ‘ she said during her daily briefing earlier this month.

When further pushed on the contents of voicemail and if the administration is being open with the American people, she said, ‘I cannot comment on any materials from the laptop,’ this time dropped the ‘alleged.’

It is not clear if Jean-Pierre is saying that she cannot comment on the issue for legal reasons or otherwise or if she is strategically choosing not to speak on the matter.

Jean-Pierre insisted that Biden’s silence on the matter is not an indication that he isn’t being honest with Americans.

Biden has consistently claimed he has no involvement with his 52-year-old son’s international business, despite the voicemail clearly showing otherwise.

Even though voters polled by Rasmussen claim that they think President Biden knew about his son’s business, they do not think that any of the federal investigations will lead to criminal charges against his son.

Thirty-five percent, however, think that it’s ‘not very likely’ and 21 percent think it’s ‘not at all likely’

Twelve percent say they are not sure.

The online and over-the-phone survey was taken among 1,000 U.S. likely voters on two nonconsecutive days last week – July 14 and July 17. It has a margin of error of plus or minus 3 percentage points.