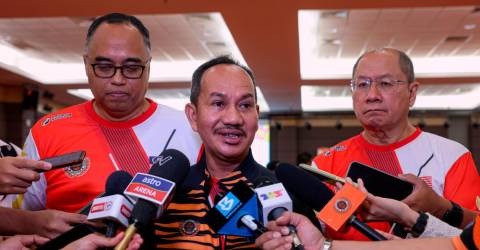 KUALA LUMPUR: The National Sports Council (MSN) is optimistic that the national contingent will be able to achieve better results at the 2023 SEA Games in Phnom Penh, Cambodia compared to the edition in Hanoi, Vietnam, last May.

MSN Deputy Director-General (Strategic) Suhardi Alias (pix) ​​said the national contingent have already made preliminary preparations including carrying out the selection of athletes in March 2020 to face the biennial games scheduled to take place from May 5 to 17, 2023.

“We have been ready from the beginning, six months from now is not a long time but we are confident that the athletes will be able to produce something that will make the country proud (at the 2023 SEA Games),“ he told reporters after attending the Cambodia 2023 SEA Games Phase 1 Athletes Assembly here today.

However, Suhardi expects the medal target to be announced only a month before the 32nd edition begins.

At the 31st SEA Games in Hanoi, Malaysia managed to surpass the target of 36 gold, 35 silver and 75 bronze medals by winning 39-45-90 medals, thus finishing in sixth place overall.

In the meantime, Suhardi said today’s gathering of athletes was more focused on providing motivation in addition to explaining aspects of sports science to help athletes prepare to shoulder the country’s challenge in Cambodia.

Meanwhile, MSN Athletes Division director Jefri Ngadirin said the move to highlight athletes under 23 in the B category was made to give them useful exposure considering that the group is expected to be the country’s main support group n the next two editions of the SEA Games, namely in Bangkok in 2025 and Kuala Lumpur in 2027.

“This is also the best move made by the Olympic Council of Malaysia (OCM) Selection Committee to prepare the best contingent for the 2024 Olympic Games in Paris and the 2028 Olympic Games in Los Angeles where athletes under the age of 23 can potentially win medals,“ he said.

Last month, the committee meeting decided that only athletes aged 23 and below can represent the country in Category B, thus seeing that there will be no more ‘veteran’ athletes who will compete in the Cambodia SEA Games next year without passing the Category A qualification limit, which is being among the three best in Southeast Asia.