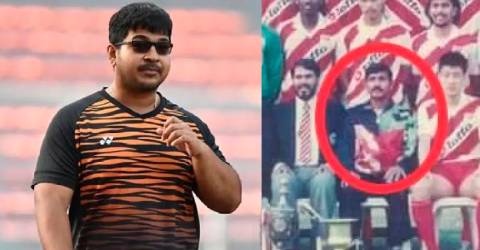 KUALA LUMPUR: The triumph of Kuala Lumpur City FC (KL City) in winning the Malaysia Cup on Tuesday (Nov 30) was the perfect wedding gift for the team’s physiotherapist, Renesh Prabaharan.

Renesh, 31, who got married last night, less than 24 hours after making sure all the players were ship-shape for the moment of truth on the final stage after 32 years, regards it as a dream come true.

And why not, as he continues the legacy of his late father K. Prabaharan, who was a physiotherapist with the ‘The City Boys’ squad to achieve the Malaysia Cup hattrick from 1987-1989.

“At first, I myself never thought this team would win the Malaysia Cup trophy because I had just joined them, but it turned out to be a great success, apart from it being an invaluable wedding gift for me.

“It was always my dream to follow in my father’s footsteps to become a physiotherapist for KL City FC. Though it was a crazy, hectic night on Tuesday, I was there for my team,” he said when met by Bernama at his wedding.

KL City emerged champions of the 100th edition of the Malaysia Cup when they stunned defending champions Johor Darul Ta’zim (JDT) with a convincing 2-0 victory at the National Stadium in Bukit Jalil two days ago.

Meanwhile, Renesh’s mother Chan Sok Gan, 66, said she bore witness to Renesh’s diligence in ensuring that all the footballers were in top shape throughout the season, especially the Cup final.

“My (late) husband was in the team when they won their last Malaysia Cup in 1989, so I am very proud and happy for Renesh, I can see Renesh’s dedication because before this, many injuries had cropped up, so as a physiotherapist, there was much for him to do.

“It’s not easy for Renesh, (as) it’s a rice bowl for the players. If they can’t play, they don’t get income (or bonus), so it’s a crucial relationship,” she explained.

Chan Sok, who is also a physiotherapist, hopes that Renesh will continue to provide good service to the KL City FC squad and continue his father’s legacy. – Bernama