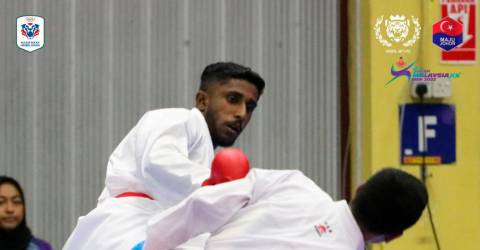 SHAH ALAM: National karate exponent H.Sureeya Sankar, who won the gold in his Malaysia Games (Sukma) debut, has dedicated his medal to his home state Johor to commemorate Malaysia Day

The 20-year-old was in a class of his own, beating his rival from Selangor, K. Thevadharshan 8-0 in the men’s 67 kilogramme (kg) kumite final at Dewan Kompleks Sukan Universiti Teknologi MARA (UiTM) Shah Alam today.

He admitted that he felt slightly pressured by his status as a double gold medal winner at the Hanoi South East Asian (SEA) Games, but was thankful that he delivered the gold in front of the Johor contingent, who had showed up to cheer him on.

“I was nervous as this is my first time in Sukma, but I was targeting the gold and now that I’ve won, I’m very happy. That’s why I wanted this win so badly because I want to dominate my favourite category.

“I had a plan from the start, so when it worked, I was glad. I knew that he (Thevadharshan) had a height advantage over me, so I tried to be calm at the start,” he told reporters here today.

Meanwhile, Penang athlete Lim Hui Ling, 19, managed to secure the gold in the women’s individual kata event, and said that her win would motivate her to achieve more in the future.

Terengganu’s Zakiah Adnan won the women’s over 68 kg kumite gold, while the under 68 kg gold was won by Sabahan Amirah Syahirah Azlan.