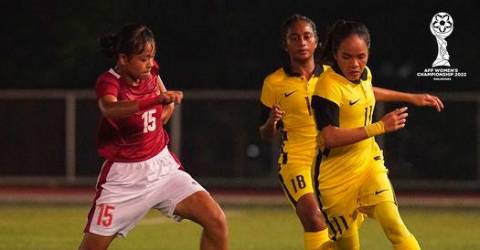 KUALA LUMPUR: The national women’s football team escaped their first loss at the 2022 ASEAN Football Federation (AFF) Women’s Championship after bouncing back to tie Indonesia 1-1 in the second match of Group A in Binan, Philippines tonight.

In the action at the Binan Football Stadium, team captain and defender Steffi Sarge Kaur came to the rescue after scoring the equaliser in added time of the second half to give the Malayan Tigress squad a valuable point.

The experienced player’s goal equalised Sheva Imut Furyzcha’s 74th-minute opening goal after both teams were tied without a goal in the first half.

The result saw Jacob Joseph’s squad once again settling for a point after playing to a draw against Singapore in the opening match last Monday, with two points collected now and in third place behind leaders the Philippines and Thailand in second place.

The Philippines now have six points after maintaining their unbeaten record with a 7-0 thrashing of Singapore while Thailand collected four points after a 2-2 draw against Australia’s Under-23 (U-23) squad in two more Group A matches today.

The 2-2 draw allowed the Australian U-23 squad to move up one rung to fourth place while Indonesia (fifth) and Singapore fell to the bottom with all three teams sharing one point after two matches.

Malaysia will continue the group stage matches against the host team this Friday followed by Thailand on July 10 and the Australian U-23 squad on July 12.

In the 2019 edition, which was the last time the competition was organised, Malaysia failed to advance to the knockout round after finishing the group stage in third place with two wins from a total of four matches.

The best achievement of the national women’s team in the AFF Championship was in the 2007 edition which saw Malaysia advance to the semi-finals.-Bernama