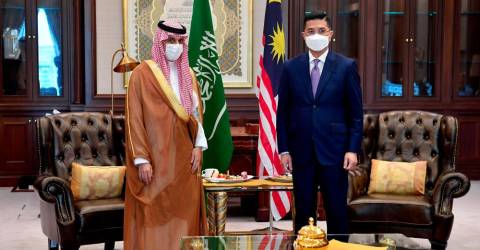 KUALA LUMPUR: Malaysia is welcoming Saudi Arabia to leverage the country’s position as the ideal gateway for the kingdom’s enterprises to penetrate the Asean market as well as the larger Asian market through the mega Regional Comprehensive Economic Partnership (RCEP), which comprises 15 countries in the Asia-Pacific region.

“This would be particularly strategic in view of the recently launched Indo-Pacific Economic Framework (IPEF) of which, Malaysia is a partner country,” it said in a statement in conjunction with a courtesy call to Senior Minister of International Trade and Industry Datuk Seri Mohamed Azmin Ali from Saudi Foreign Minister Prince Faisal bin Farhan and his delegation in Putrajaya today.

It said during the meeting, both Malaysia and the kingdom reaffirmed commitments to strengthen bilateral trade and investment relations to greater heights.

“In this regard, both parties concurred on the imperative of the businesses being led by the private sector,” it said.