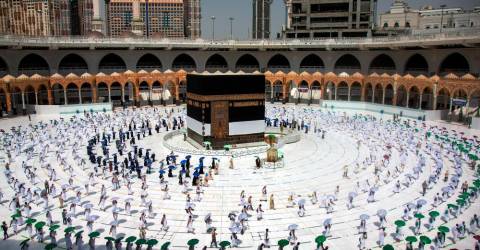 Manager of Maktab 47, Roslan Jonet said they would receive about 295 pilgrims who departed from Madinah via seven buses before being taken to the Abraj Al-Janadriyyah building, here.

He said this was the first group of pilgrims who departed from Malaysia on June 4.

“There will be a small event to welcome the first group tomorrow before they perform their umrah. In terms of accommodation, pilgrims will be grouped according to their flight schedule and certain assessments including family ties,” he told reporters after a briefing session on Lembaga Tabung Haji (TH) preparations today.

So far, a total of 1,940 Malaysian pilgrims have arrived in Madinah via seven flights.

Roslan, who is also TH Melaka director, said 30 staff or six staff for each maktab would work round the clock to ensure the welfare and comfort of all pilgrims.

This year, a total of 48 flights will bring 14,306 Malaysian pilgrims to the Holy Land, with the last flight on July 2. — Bernama