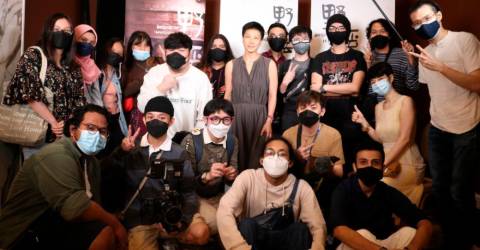 “I was really flattered that many actresses came to the screening, and told me they enjoyed the film… They relate to the character Moon, each in a different aspect… When I decided to act for Barbarian Invasion, the biggest challenge was not the martial art training, but to play as an actress,” Tan said.

Barbarian Invasion tells the story of an actress who had not been acting for 10 years and decided to accept the offer to act as a lead role in a do-your-own stunts Southeast-Asian Bourne Identity.

“It is very hard to find a martial arts film in Malaysia. Watching Chui Mui on Barbarian Invasion, her physic and movements, you just know that she worked very hard for it, she put her pride in whatever regardless whether it was mma or kung-fu. I really enjoyed it and I can relate with the film, because the character as an actor, a single mother, having to juggle the life of an actress and mother is not easy,” Vanida said.

“I think when I saw the question ‘Who Am I’ multiple times throughout the movie, it is a reflection of what I went through in the earlier years with my children, always trying to figure out who I was, could I be a good mother, actress, could I be good at everything, and being able to please everyone,” Sofia said.

“Barbarian Invasion has shown the method, process and journey she went through as an actress. I urge all Malaysians to come and watch it,” Sharifah Armani said.