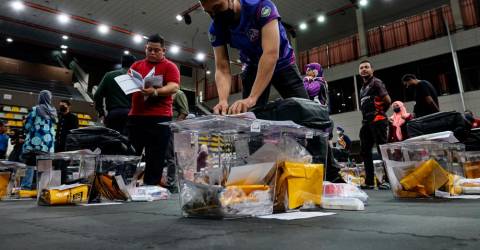 KUALA LUMPUR: Malaysians will go to polls this Saturday in one of the most unpredictable general elections in the country since independence, with no indication as yet on the coalition that will garner the required numbers on their own to form the next government.

Analysts tracking the 15th General Election (GE15) have not ruled out a hung parliament or a multi-coalition government after the election if the respective coalitions fail to achieve the required numbers – at least 112 of the 222 seats in the legislative assembly Dewan Rakyat.

Malaysia’s GE15 is marked by the participation of a record number of candidates – 945 in total. And for the first time, 1.4 million Malaysians above 18 who were automatically registered as voters will also vote, adding to the uncertainty over the outcome as their voting pattern is unknown.

This time around there is another Malay based party – Perikatan Nasional (PN) – that has joined the fray with analysts seeing the party splitting the crucial Malay votes, further eroding the support base for UMNO the lynchpin of the Barisan Nasional (BN) coalition.

Two-time prime minister Tun Dr Mahathir Mohamad, who is also Gerakan Tanah Air (GTA) coalition chairman, cannot be ruled out from the premiership though he has not provided any indication as yet.

Unlike in GE14 in 2018 where there was a strong undercurrent against the then ruling coalition BN, political scientist from Universiti Kebangsaan Malaysia Dr Jamaie Hamil concurred that this time around the outcome of the election is difficult to predict as none of the coalition appear to have an edge over the other.

A hung parliament or multi-coalition government could well be the outcome, he said.

Meanwhile, Senior Lecturer at the Faculty of Leadership and Management of Universiti Sains Islam Malaysia (USIM) Dr Sofia Hayati Yusof said this election is largely driven by sentiments on anti-corruption and abuse of power, with calls to reject candidates and leaders with tainted backgrounds.

Some politicians also turned to racial sentiments, she said.

“From the analysis carried out, I can see that the voters rejected all of this; but even though each of these coalitions has its own support base, it is still difficult to anticipate the (GE15) results later,“ she said when contacted by Bernama.

She believed that the majority of voters, especially the young generation, would be able to assess how each coalition’s offers can benefit them and the country.

“These three coalitions (BN, PN and PH) have governed the country; although for PH it was not long, but they (PH) have governed in Selangor, Penang and Negeri Sembilan. So it is their experiences that are being observed and analysed by the voters,“ added Dr Sofia.

Jamaie, however, opined that youth voters and first-time voters will be the key factor in deciding which coalition will triumph on Nov 19.

He believes that most young voters have made their decision on their choice of party based on issues raised, such as corruption and leadership characteristics, that are seen to be indicators of the respective party’s ability to lead Malaysia after the 15th general election.

He went on to say that the Undi 18 group is a generation that does not feel bound and indebted to any political party and politician, irrespective of how long political party had governed.

“They do not feel indebted to any (political) party, nor are they influenced by parents who support a certain party. They are free to choose which (one party or candidate) they think is appropriate.

“So, young people now are being wooed by the four major political parties because they expect young people to help them,“ he told Bernama.

Youth voters, better known as Undi 18, refer to voters in the 18 to 20 age group who are now eligible to vote following a constitutional amendment that lowered the age of voting from 21 to 18 years old on automatic voters registration.

Early voters who comprised armed forces and police personnel together with their spouses had cast their votes on Tuesday.

Besides the Parliamentary election, GE15 will also see the concurrent occurrence of state elections in three states – Perak, Pahang, and Perlis – as well as a by-election for Bugaya, a state constituency in Sabah. – Bernama