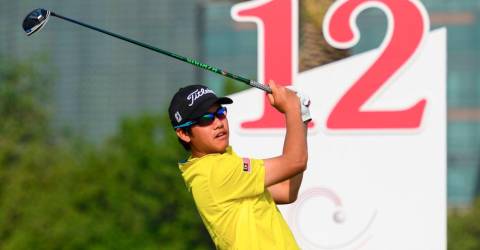 Going into the 13th edition of the AAC, the United States-based golfer looks to be in excellent form and has put together a string of good results over the past six months, including three wins on the Malaysian amateur circuit.

Playing for the Sacred Heart University (SHU) ‘Pioneers’ golf team, Lim has also notched up six straight top-eight finishes on the U.S. collegiate circuit including victories in the Ryan T. Lee Memorial Collegiate in September and the Columbia Autumn Invitational earlier this month.

“I have honestly been playing much better golf in the last six months. I think my game has improved as I changed the way I approach golf; now I go into every tournament with a positive mind-set and just try to enjoy it as much as I can,” said Lim, who is in his junior year with SHU, located in Fairfield, Connecticut.

“I’m just looking to keep doing what I’m doing, continue to work on the stuff I need to work on, and try to keep getting better,” added the 21-year-old.

In his maiden AAC appearance at Dubai Creek Golf & Yacht Club last year, Lim missed the halfway cut after rounds of 74 and 75.

“I definitely learnt a lot from last year’s event, and I’m certainly looking to improve my performance. The goal is to finish in the top-25 this week!” said Lim confidently,

The biggest challenge, Lim stressed, would be adapting to the humid tropical conditions in Thailand and overcoming the jet lag accumulated from the long journey here.

“I’ve been playing well over the fall semester, averaging under-70 over 13 rounds. I’m just hoping to be able to get used to the warm weather and overcome the jet lag in the coming days. I’ve also been making some swing adjustments with my coach and I hope it will work out well this week,” said Lim, who has won six individual titles on the U.S. collegiate circuit.

A member of the gold medal-winning Malaysian team at the Southeast Asian (SEA) Games in Vietnam in May, LIm rates the AAC as the biggest amateur event he has ever played in.

“I think that the AAC is such a prestigious event for amateurs in the Asia-Pacific region, as it allows us to compete with the best players from the region at some of the best golf courses.

“It also opens huge doors for the players as we’re all playing for a spot in the Masters Tournament and The Open,” said the young talent.

The best finish by a Malaysian in the AAC is seventh by Mohd Iszaimi Ismail during the inaugural event in 2009 at Mission Hills Golf Club in China, which was matched by Ervin Chang in 2018 at Sentosa Golf Club in Singapore.