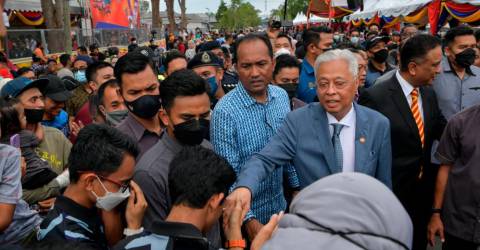 Calling Organisation of Islamic Cooperation (OIC) member countries and Arab League as well as all nations that believe in democracy and human rights to take similar action, he said they have to use their influence to put serious pressure on Israel.

“Be united once, just to give hope to Palestinians, just to make Palestinians feel that they are backed up by their own 1.7 billion Muslim brothers and sisters around the world. It’s not enough to keep silent.

“I know the maximum we could get out of Arab and Muslim countries just condemn on the Israeli settlement. This is not enough.

“Malaysia doesn’t hesitate to do its best, but Malaysia alone can’t do it. We need other countries to do the same. There’s no reason why other countries can’t do the same,” he said in a talk show programme titled ‘Bicara Khas: Justice for Palestine’ on Radio Televisyen Malaysia (RTM) on Sunday night.

During the ASEAN leaders’ meeting with President Joe Biden at the special summit in Washington, D.C. on May 13, Ismail Sabri urged the United States to be honest and transparent in dealing with the Israeli-Palestinian conflict.

“Israeli atrocities must be stopped. The US must be honest in resolving the issue. If the US can take swift action in Ukraine, we want the same swift action to be taken on the Palestinian issue,” the Prime Minister said.

He stressed that the state of terrorism carried out by the Israelis against the Palestinians continued and witnessed by the international community on daily basis, but no concrete actions have been taken to stop the Israeli atrocities.

“Europe and United States of America managed to take sanctions against Russia and for what’s happening in Ukraine. Why for one time (they) can’t do the same against Israel?

“We as Palestinians are so frustrated and we believe that we have been ignored by the international community,” he said.

Noting that the stability in the Middle East could only be achieved if Palestinians get their rights, Abu Ali said Israel will never enjoy peace without putting an end to the Palestinian suffering.