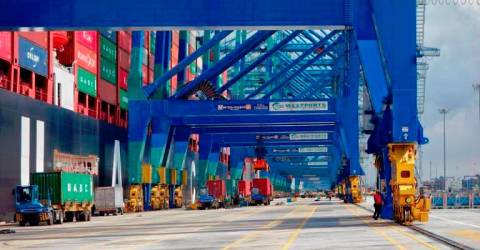 PETALING JAYA: Malaysia’s trade soared to a new high in 2022, surpassing RM2 trillion for the second consecutive year and registered the fastest growth since 1994.

Meanwhile, imports posted another milestone by surpassing the RM1 trillion mark for the first time. Trade surplus was posted for the 25th consecutive year since 1998.

“This is a positive reflection that the nation’s trade performance is on an upward trajectory, boosted by higher external demand and strong commodity prices,” he said in a statement today.

The growth was driven by exports of electrical and electronic products, petroleum products, liquefied natural gas, palm oil and palm oil-based agriculture products, crude petroleum as well as machinery, equipment and parts with each product recording more than RM10 billion increase with double-digit growth. Except crude petroleum, all these products also posted the highest export value ever.

Malaysia’s solid trade performance was in line with other economies in the region notably Taiwan and South Korea, following steady global demand.

“Despite the challenging global landscape, we will continue to enhance the promotion of international trade and exports to reinforce business resilience and sustain economic growth momentum, he added.