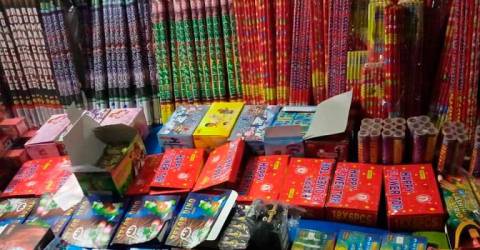 KOTA BHARU: A man in his 30s was detained in possession of firecrackers worth over RM250,000 by the Seventh Battalion of the General Operations Force (GOF7) in a raid mounted on business premises used to store firecrackers near Kampung Bukit Kechil, Gunong in Bachok, yesterday.

“GOF7 personnel detained a man who claimed that he was the tenant of the business premises.

“Further investigations on the premises found 81 boxes and 21 sacks containing various types of firecrackers estimated to be worth RM254,616,” he said in a statement today, adding that all the firecrackers were believed to be intended for the Johor market.

Azhari said initial investigations revealed that the firecrackers were believed to have been smuggled from Thailand through illegal jetties and were transported in small quantities using cars to avoid detection by the authorities.

He said the case was being investigated under Section 8 of the Explosives Act 1957.

In another development, Azhari said GOF7 detained a 37-year-old man who was transporting four illegal immigrants from Thailand aged between 29 and 38 using a Proton Exora vehicle at a roadblock mounted at Lalang Pepuyu, Tanah Merah at 9.15 am yesterday.

He said the illegal immigrants failed to produce valid travel documents, adding that the man was believed to have attempted to smuggle them out of the country after fetching them from Penang and Selangor with a fee of RM1,700.

They were all handed over to the Tanah Merah district police headquarters for further investigations, he added.-Bernama