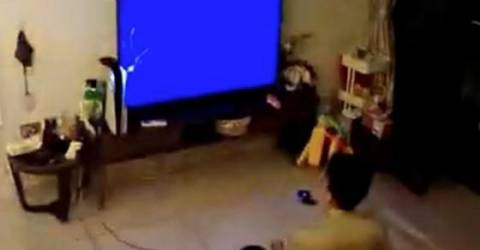 WE’VE ALL FELT like flinging the controller at the television during a particularly frustrating session of FIFA.

For whatever reason, the game just isn’t going your way and, to make matters worse, your opponent insists on constantly making snide remarks everytime he scores.

Alia Zaferi, a doctor in her mid-20s, released a video on Twitter showing her husband being enraged after losing a PlayStation 4 FIFA match.

According to the footage, Alia’s husband was playing a FIFA game on PS4 while sitting on a mat. Typically, we would play games to unwind, but Alia’s husband appeared to be very tense until he lost the match.

He flung the controller on the mat, which bounced towards the TV, subsequnetly damaging the screen.

He took a moment to realise what had happened before falling back onto the pillows behind him.

Alia told WORLD OF BUZZ that she was taken aback when he informed her what had transpired at first.

However, based on the 15-second video, some internet users concluded that Alia’s husband was an abusive man.

“He’s a lovely man. A wonderful husband and daddy. For netizens to judge him based on a merely 15s vid is unfair. It was an accident, he was upset and he accidentally smashed the controller on our daughter’s playmat (which is super bouncy), then the controller bounced nicely towards our TV!”

Alia also informed WORLD OF BUZZ that the television had been replaced.