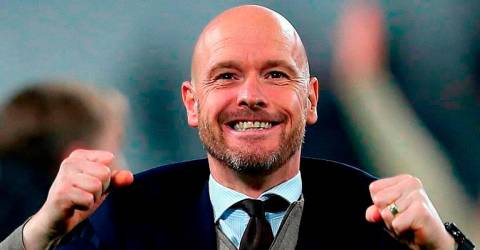 MANCHESTER: Manchester United were in desperate need of a fresh start after a disastrous campaign last season, but while the early signs of progress under new coach Erik ten Hag are encouraging, a lack of arrivals in key areas could hinder any potential revival.

Having finished second in 2019-20, United supporters were dreaming of a long-overdue title and optimism levels reached fever pitch when Cristiano Ronaldo returned to the club in August.

United looked to have the talent to seriously challenge bitter rivals Manchester City, but they never looked like doing so.

As well as collecting their lowest Premier League points tally (58), United failed to finish a top-flight season with a positive goal difference for the first time since 1989-90.

A complete reset was needed with Ajax Amsterdam coach Ten Hag taking the reins. The 52-year-old came with a strict reputation, one that has sat well with the players, given how last season ended with such a whimper.

“Discipline is not only the way you play on the pitch, it’s also off the pitch,“ midfielder Bruno Fernandes said. “If everyone is on time and someone comes late, he should be punished.

“I think that’s really good that he (Ten Hag) is doing that and amazing because I like to be on time, and so should everyone else.”

The tough love initially bore fruit, with United impressing on their unbeaten pre-season tour of Thailand and Australia, where a 4-0 over Liverpool particularly stood out.

But their fans remain frustrated by the club’s efforts in the transfer market.

While defenders Lisandro Martinez and Tyrell Malacia have come in — United conceded 57 goals last term, the most among the Premier League’s top six — other areas of the squad have been neglected.

Danish midfielder Christian Eriksen signed on a free transfer but he is more of a playmaker, with United remaining short of defensive options in the middle of the park.

British media reported that United have been chasing Barcelona midfield anchor Frenkie De Jong for several months, but no deal has been agreed.

Last season’s top scorer Ronaldo’s future hangs over the club, too. The veteran Portuguese has reportedly asked to leave in order to compete in the Champions League, but United are adamant he is not for sale. Ronaldo missed the tour of Thailand and Australia for family reasons.

Ten Hag talked about not needing any distractions when taking the job on, and there is no bigger headline-maker in his squad than Ronaldo.

Should Ronaldo exit, and with Edinson Cavani having also departed, Ten Hag will be short of strikers. French forward Anthony Martial was given his chance to shine on tour up front alongside Marcus Rashford, an opportunity he grasped with three goals, but the fact Martial and Rashford between them scored five league goals last season must be a concern.

There is time to still refresh the squad before Sunday’s opener against Brighton & Hove Albion, but with their rivals spending big to bolster their numbers, Ten Hag could be left without the tools to start his rebuild. -Reuters