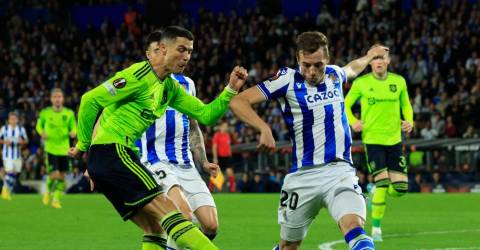 LONDON: Manchester United failed to usurp Real Sociedad at the top of Europa League Group E despite a 1-0 win in San Sebastian, as Arsenal did secure their place in the last 16 on Thursday.

United now face a tricky playoff against one of the sides dropping down to the Europa League from the Champions League in February with Barcelona and Juventus potential opponents.

Alejandro Garnacho scored the only goal of the night at the Reale Arena after just 17 minutes to surpass George Best as United’s youngest ever non-English scorer in Europe at 18.

But the Red Devils were left to rue their defeat to the Spaniards at Old Trafford on matchday one as they missed out on topping the group on goal difference.

“We win today but of course we are disappointed we didn’t score two goals because that is what we needed.”

Arsenal did not make the same mistake as a 1-0 win over FC Zurich was enough to hold off PSV Eindhoven to win Group A.

But Mikel Arteta’s men were made to work for the three points after Kieran Tierney’s early strike put them in front.

Arteta was forced to turn to his bench in the second half with Bukayo Saka and Thomas Partey risked despite a trip to Chelsea on Sunday for the Premier League leaders.

And the Gunners had a close escape when Adrian Guerrero fired home for the Swiss champions only to be flagged offside.

Roma won their showdown with Ludogorets Razgrad to progress to the playoff round thanks to a second half fightback in the Italian capital.

The inaugural Europa Conference League winners were heading back to that competition when the Bulgarians led 1-0 at half-time.

Feyenoord and Midtjylland progressed from an incredibly tight Group F that saw all four sides end on eight points.

The Dutch giants beat Lazio 1-0 in Rotterdam thanks to Santiago Gimenez’s goal.

Union Berlin, Nantes and Monaco also won to secure progress to the playoffs.

Arsenal and Sociedad will be joined by Fenerbahce, Real Betis, Union Saint-Gilloise, Feyenoord, Freiburg and Ferencvaros in progressing directly to the last 16.

West Ham rounded off a perfect group stage of six wins from six despite fielding a young side in a 3-0 win away to FCSB in Bucharest. – AFP