A man whose erection lasted two days developed gangrene and needed the tip of his penis amputated.

The extraordinary case of the unnamed 52-year-old, from India, has been published in an medical journal.

Doctors revealed the man first went to the hospital because he couldn’t get rid of a ‘painful and sustained’ erection.

When medics drained the blood, however, they left a catheter in and he quickly developed a black gangrene on the head of his penis.

The unnamed patient, 52, first went to a medical centre in the north of India because he had a painful erection which wouldn’t go away. But within four days he had had the end of his penis amputated, his doctors revealed in BMJ Case Reports (stock image)

By the time he returned to hospital there was so much dead tissue surgeons were left with no option but to amputate.

The man was treated at King George’s Medical University in Lucknow – around 310miles (500km) south east of New Delhi.

He first sought help for priapism, the medical term for a persistent and painful erection of the penis, according to an article in BMJ Case Reports.

He had been suffering from the painful condition for 48 hours before first going to a medical centre.

It is unsure what triggered his priapism. It is considered a medical emergency if an erection lasts for longer than two hours.

However, the NHS states it can be caused by sickle cell disease, illegal and legal drugs, or by taking Viagra or similar erection remedies.

Surgeons put a device called a shunt, which diverts blood flow, into his penis along with a urinary catheter, and wrapped it in a compressive bandage.

But just the day after his operation, the glans (head) of his penis – which became flaccid – began to turn black.

‘We removed his urethral catheter,’ Dr Saqib Mehdi, who treated the patient, wrote in the case report.

‘But still the black colour of glans penis deepened over the next day and a clear line of demarcation became visible between it and the penile shaft.’

Doctors couldn’t stop the gangrene, which is the irreversible death of skin and flesh, so decided the best option was to amputate the head of the penis.

Three weeks after the life-changing operation the man could urinate normally and had a ‘healthy wound’, the report said.

Dr Mehdi and his colleagues suggested the catheter and tight dressing put on after the procedure to treat the man’s priapism may have triggered the gangrene.

A man who got two ball bearings stuck on his penis after putting them there for sexual pleasure nearly lost his member when it started to rot.

The unnamed 33-year-old had left the rings on the shaft of his penis for two weeks before visiting the hospital with pain and swelling.

After normal treatment failed, doctors resorted to using an industrial stone-cutting saw to hack off the metal rings in what they called a ‘desperate measure’, they revealed in BMJ Case Reports.

The medics at UCMS & GTB Hospital in New Delhi, India, described the unfortunate man’s penis as ‘engorged’ and ‘tender’, and it appeared red raw in photos. 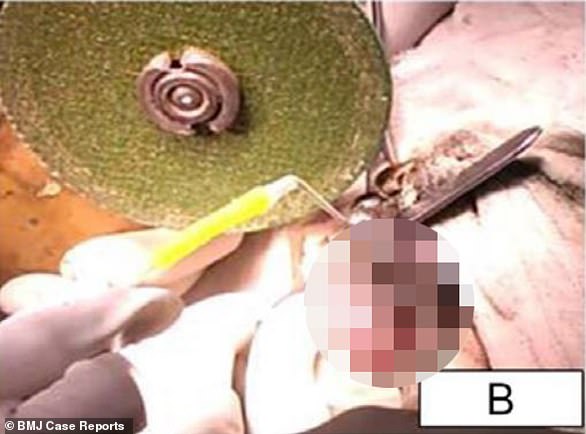 Doctors said they needed a desperate measure to fix a desperate situation: They used a circular saw designed for cutting marble to hack the steel hoops off the man’s penis

Thanks to their extreme efforts, however, the penis was rescued from getting gangrene and dropping off, and he was able to get erections again within a fortnight.

Doctors tried giving the man injections to shrink his penis, using a pressure cuff to squeeze it, and using a small wire medical saw to cut the metal but they all failed.

In the journal they wrote: ‘To ensure penile salvage in desperate situations [it may be necessary] to use desperate measures that may be unconventional and are difficult to avoid.’