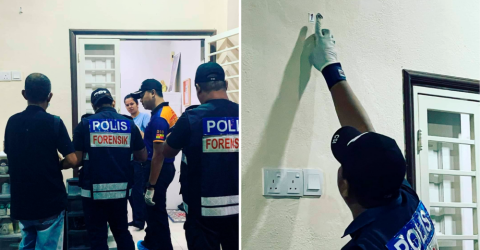 KUALA LUMPUR: A local man faced anxious moments when his house in Seri Aman Heights in Desa Jaya here is believed to have been shot at yesterday.

Gombak district deputy police chief Supt Noor Ariffin Mohamad Nasir said police received a distress call from the man at 1.50 am before a team from the district headquarters, together with a forensics unit and a K9 unit, was dispatched to the scene.

“The victim claimed to have heard an explosion outside his house. The investigation found a hole in the wooden front door and bullet marks on the living room wall.

“Also found was a piece of metal believed to be a bullet fragment at the living area of the house,” he said in a statement last night.

Noor Ariffin said the case was being investigated under Section 39 of the Arms Act 1960 for discharging firearms outside of a shooting range.

“Police were still investigating the motive behind the incident and tracking down the suspect. Anyone with information about the incident is urged to contact the investigating officer Insp R. Khalpna at 03-61262222 or 012-5018901,” he added. – Bernama