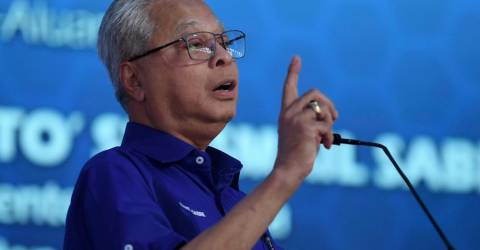 LABUAN: There are still many young voters aged 18 and above throughout the country who are unaware that they have been registered automatically as voters, Prime Minister Datuk Seri Ismail Sabri Yaakob said.

“Many young voters don’t even know their names have been listed on the electoral roll….now, as soon as they are 18, they automatically become voters….some might not even notice this.

“There have been occasions of my meeting young voters, especially students, and they don’t know they are already in the electoral roll,” he said in his address at the ‘Majlis Amanat Jelajah Keluarga Malaysia’ held at the Kompleks Ujana Kewangan convention hall today.

Ismail Sabri, who is an UMNO vice-president, said Barisan Nasional (BN) parties’ machinery must approach youths and explain the matter to them.

“The BN party machinery needs to reach out to young voters in their respective areas and ensure they come out to vote during polling day next month.

“Otherwise, they might not know and not come out to vote, that’s why we need to inform them,” he said, adding that it was not the Election Commission’s (EC) duty but that of the BN machinery to do so.

On claims of a drastic rise in voters in Sabah, Ismail Sabri asked the EC to conduct an investigation into the validity of the additional voters, adding that the increase did not seem to involve young voters.

“If they were young voters, we would understand, so in this case, the EC should investigate and if there are any concerns, we leave it to the commission to take necessary action,” he said.

Sabah chief minister Datuk Seri Hajiji Noor on Oct 20 had said that the state government would get further information from the Sabah EC over the total of registered voters in the state, which was said to have increased drastically.

He said that they had conveyed the concerns of several parties to the commission and that the state government required further information on the matter.

The media had previously reported that Sabah Progressive Party (SAPP) president Datuk Yong Teck Lee had found the rise in total voters in Sabah for the upcoming 15th general election (GE15) as shocking, as there was a 53.9 per cent increase in new voters, from 1.1 million voters in 2018 to around 1.7 million this year. -Bernama