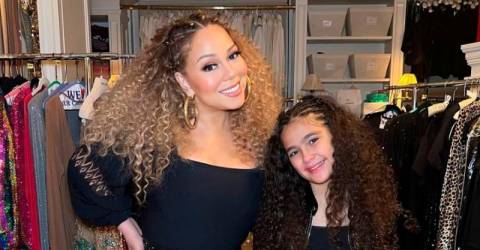 POP singer Mariah Carey is known for her love of big brands and sophisticated fashion, and it looks like her daughter, 11-year-old Monroe Cannon, is following in her footsteps.

Over the weekend, Carey, 52, shared pictures on both Instagram and Twitter showing her night out on the town with her daughter, with both of them sporting matching black outfits.

The two also showed off their curls in style, with braids in the front and curls in the back, as the Big Energy singer called the moment a “Mum/Daughter Duo Hair Extravaganza” on Twitter with some butterfly emojis.

Other photos from the night show Carey and Monroe standing together in a closet and outside a building.

In the comments section, Instagram users pointed out the similarities in their looks. Musician Anastacia commented: “Mini Mimi” below one picture of the pair.

This isn’t the end of Carey’s fashion adventures, as she recently launched a butterfly-themed jewellery collection with Chopard. The collection coincides with the 25th anniversary Butterfly, which she once called her “most personal album.”