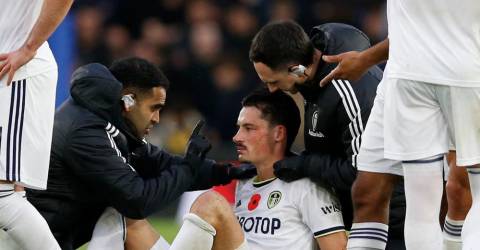 LIVERPOOL: Leeds United boss Jesse Marsch heaped praise on the young trio of Crysencio Summerville, Sam Greenwood and Wilfried Gnonto after they played a starring role in the team’s 4-3 comeback victory over Bournemouth in the Premier League yesterday.

Summerville earned a third-minute penalty and scored the 84th-minute winner that was assisted by Gnonto, while Greenwood scored a superb long-range goal to reduce the deficit before contributing to the equaliser with a corner kick.

All three players are aged between 19 and 21 and they turned things around for Leeds, spurring on the hosts despite them finding themselves 3-1 down early in the second half.

“The first half wasn’t our best. We tried to change a few things during the half and then some changes at halftime and we believed we could still win the match. We dug a bigger hole to go down 3-1,” Marsch told the BBC.

“Sam Greenwood comes on and plays really well to get the goal. Willy Gnonto is a spark within our team at the moment. He plays really mature in the play to set up the fourth.

“And of course, Cry Summerville continues to grow and get better. We have a lot of good young players and we need to continue to invest in them.”

Marsch came under pressure when Leeds lost four in a row last month to hover above the relegation zone but a 2-1 win at Liverpool last week and yesterday’s victory moved Leeds up to 12th in the standings ahead of Everton’s match against Leicester City.

The victory marked the first time Leeds had won two Premier League games in a row this season and fans celebrated by letting off fireworks outside Elland Road.

“The fans have the right to opinion and emotion. We all do. The sport requires that. My focus is entirely on making sure the group is strong,” Marsch added.

“At halftime I said to them not to be fazed by the negativity in the stadium and stay focused on the tactical aspect of what we are trying to bring, get into the game more and more and we will win. We did that.” – Reuters