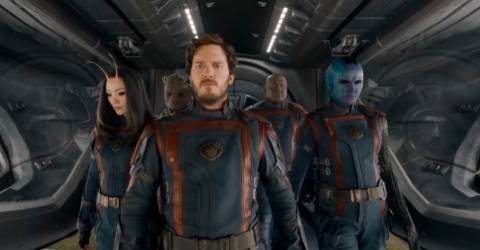 MARVEL released the first trailer for Guardians of the Galaxy Vol. 3, featuring James Gunn’s final entry in the series. The film will uncover the origins of Rocket Raccoon (Bradley Cooper) and will see the return of Gamora (Zoe Saldaña).

In the trailer, fans were finally able to witness Adam Warlock’s spectacular arrival as an all-gold superhuman. The cosmic character, initially unveiled in the post-credits scene of Guardians of the Galaxy Vol. 2, will be played by Will Poulter, a newcomer to the Marvel Cinematic Universe.

The trailer begins with the Guardians landing on a new world populated by animal-themed aliens who throw pebbles at them. The third instalment is shaping up to be an emotional finale, as Star-Lord still misses his girlfriend Gamora, Rocket is haunted by memories from his past, as well as the team prepares for their final mission.

Rocket says ominously, “We’ll all fly away together one last time, into the forever – that beautiful sky,“ while scenes of the Guardians leaping around in multicolored space suits, battling a giant, fleshy, tentacled creature, and Adam Warlock beating Nebula.

The trailer concludes with Groot, who previously only said: “I am Groot,“ extending his vocabulary and yelling: “We are Groot” as he sprouts additional arms and fires lasers at Star-Lord.