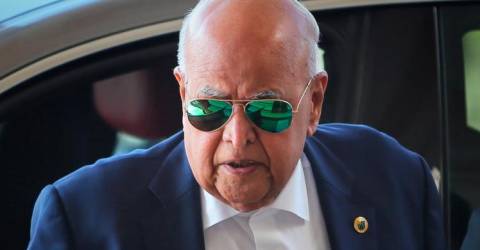 PUTRAJAYA: Datuk Seri Najib Abdul Razak and lawyer Tan Sri Muhammad Shafee Abdullah’s applications for leave to appeal against the dismissal of their judicial review challenge to disqualify Datuk Seri Gopal Sri Ram(pix) from leading the prosecution in their respective cases, will be heard by the Federal Court on May 23.

This was confirmed by the deputy head of the Civil Division in the Attorney-General’s Chambers, Shamsul Bolhassan when contacted by Bernama today.

According to Shamsul, the deputy registrar had allowed the applications by Najib and Muhammad Shafee for time to be extended until May 17 to file written submissions.

On Nov 8, last year, the former prime minister (Najib) and Muhammad Shafee lost their appeals in the Court of Appeal to disqualify Sri Ram as senior deputy public prosecutor (DPP) in their respective cases.

On Aug 28, 2020, the High Court in Kuala Lumpur dismissed the judicial review applications by Najib and Muhammad Shafee to remove the former Federal Court judge (Sri Ram) as senior DPP in their respective cases.

Najib filed the judicial review application to disqualify Sri Ram as the senior DPP in his 1MDB-linked cases in December 2018.

Muhammad Shafee, who is also Najib’s counsel, also filed for a judicial review as he too was seeking to recuse Sri Ram from his RM9.5 million money laundering trial.

The duo sought a court order to revoke Sri Ram’s appointment or recuse him, saying that his letter of appointment was invalid.

They also want a declaration that there was a conflict of interest in Sri Ram’s appointment and requested an order to prohibit him from leading the prosecution team in all of their cases, including on corruption, abuse of power and money laundering.-Bernama