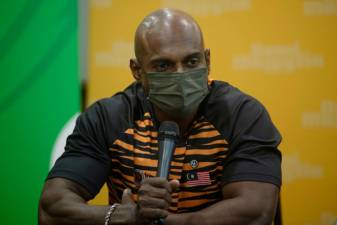 KUALA LUMPUR: The Malaysian Body Building Federation (MBBF) are banking on Mohd Syarul Azman Mahen Abdullah(pix) to bag a gold medal at the Hanoi SEA Games in Vietnam from May 12-23.

Mohd Syarul, who is fondly known as Mike, will compete in the men’s athletics physique and mixed pair events.

Although he will face stiff competition from Vietnamese and Thai bodybuilders in the Open category, national bodybuilding assistant coach Riduan Anan believes that Mike would be able to do his best.

“Bodybuilders from these two nations (Thailand and Vietnam) usually give us a tough fight on the international stage but none of us know each other’s strengths after two years of inactivity, so we hope Mike is in the best shape among all of them,” he said.

He said this at a media conference by the Malaysian contingent to the Hanoi SEA Games at the National Sports Council (NSC) in Bukti Jalil here today.

Apart from the one-gold target, the MBBF are also eyeing two silver and three bronze medals from the biennial Games, which will see the return of bodybuilding after it was last contested at the 2013 edition in Myanmar.

In that edition, Malaysia bagged had a 1-1-1 medal haul but Mike, a four-time consecutive world champion from 2016 in the athletics physique category, did not compete as the category was not listed for the Myanmar Games.

Bodybuilding was also not contested in Kuala Lumpur in 2017 as MBBF did not submit an appeal to the Olympic Council of Malaysia (OCM) before Malaysia finalised the list of sports for the Games.

As such, Mike, who is set to make his SEA Games debut, is thrilled and, at the same time, nervous, about the test that awaits him in Hanoi.

“I am aware that my biggest threat will come from bodybuilders from Thailand and Vietnam. Thailand has a world champion from another category in 2019… when I became a world champion that year, the runner-up was from Vietnam. So, I’m expecting a tough time but I will give my best and get the gold for the country.

“In the Open category, I have to make sure I look ‘bigger’ on stage. I am used to being on stage weighing 69 kilogrammes (kg), but this time I intend to weigh about 72kg-73kg… and that’s not going to be easy,” he said.-Bernama