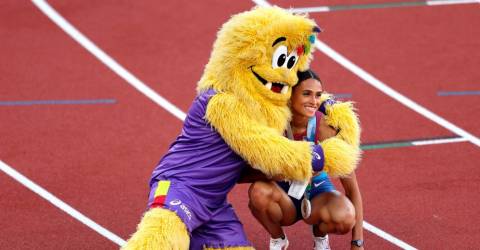 EUGENE (United States): The eighth day of the World Athletics Championships was capped with a new world record by Sydney McLaughlin(pix) of the United States in the women’s 400m hurdles on Friday.

Kimberly Garcia Leon of Peru won the inaugural women’s 35km race walk with two hours, 39 minutes and 16 seconds, a week after her gold over the 20km distance. Katarzyna Zdzieblo of Poland took silver in 2:40:03, and China’s Qieyang Shijie added another bronze in Eugene after the 20km race in 2:40:37.

On the field, China’s Olympic champion Liu Shiying could not bring out her full potential, finishing just outside the javelin throw podium where Australian Kelsey-Lee Barber defended her world championship glory with 66.91 meters. Kara Winger of the United States was second in 64.05 while Japanese Haruka Kitaguchi in 63.27.

The United States led both men’s and women’s 4x100m relay heats, with a world-leading time of 37.87 and 41.56 seconds respectively.-Bernama