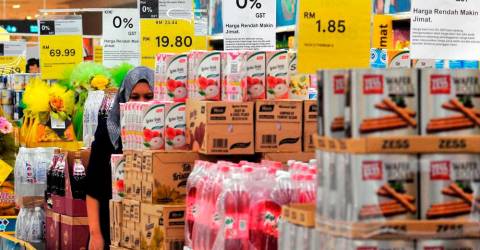 KUALA LUMPUR: The Ministry of Domestic Trade and Consumer Affairs (MDTCA) is reviewing the necessary essential goods to be listed in the price control scheme, said its minister Datuk Seri Alexander Nanta Linggi.

As such, he said, the types goods to be in the list of Maximum Price Schemes for the Festive Season in conjunction with Aidilfitri could be less or more.

However, he said, the list of items would be based on the people’s need to prepare for the festival.

“Now that the price control scheme for chicken and eggs has been implemented, by Aidilfitri we will add various more items for the price control. The list will be announced soon,” he told a press conference after officiating the Companies Commission of Malaysia’s (SSM) 20th anniversary celebration at Menara SSM here today.

Apart from that, he said, the ministry was prepared to assist the Transport Ministry address the issue on the increase in the price or air and bus fares, especially with the coming Aidilfitri celebration.

Yesterday, the media reported that the express bus fare would be increased by almost 10 per cent to 10.2 sen per kilometre starting end of this month, ahead of the Aidilfitri celebration.

Earlier in his speech at the opening of the event, Nanta said during the two decades of SSM’s establishment, over 8.5 million businesses; 31,168 Limited Liability Partnerships (LLPs) and 1,446,196 companies were registered as of March 31 last year.

He said he ministry and SSM were optimistic that the number of business and company registrations would increase this year in line with the recovery of the economic sector, as well as the current transition to endemic phase.-Bernama