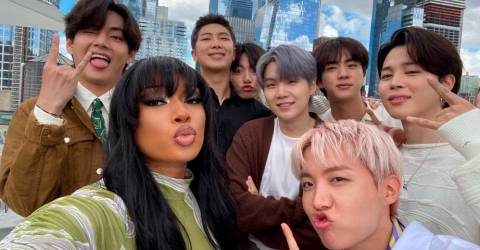 The sensational Korean boyband brought out the rapper as a surprise to fans during their Permission to Dance: On Stage concert in Los Angeles, and performed their hit single Butter (Remix).

Previously, she was scheduled to perform with the group at the recent 2021 American Music Awards (AMA). However, she withdrew last minute due to personal matters.

At the time, she released a tweet saying: “I’m so sad! I really can’t wait to hit the stage with my guys and perform #BTS_Butter real soon!”

Fans looked thrilled to see the star finally share the stage with the boys, and social media was flooded with videos of the performance.

“Give it up for the boys!” said the rapper after finishing her song. When asked about her previous absence at the AMAs, Megan deflected by saying: “But I am here. We did it!”

The Permission to Dance: On Stage concert sees the K-pop group return to live concerts after two years. The offline music event has been slated to take place on four consecutive days this week in Los Angeles.

While the first three days are not available for livestream, international fans can catch the fourth day online by streaming Venewlive.

The streaming service is offering ARMYs three ways to watch. The two ways require official fan club membership and the other for civilians. For ARMYs, you can be entitled to a 4k single view + HD multi-view for over 59,000 South Korean won (RM209.36).

But to qualify, you will need to be a currently registered ARMY fan club member with good standing on Weverse (RM127.14 available on Weverse). Whereas the general package offers civilians an HD single view for over 49,500 won (RM175.67). And no official ARMY membership is required for viewing.