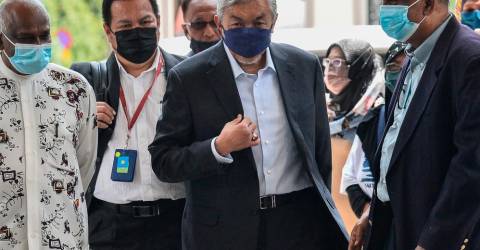 ALOR GAJAH: Umno and Barisan Nasional’s (BN) cooperation with other parties in the Melaka State Election will be decided after three levels of meetings scheduled next week.

He said Umno was open to views from various parties, but all decisions would be made collectively when the time came.

“The Melaka State Election will certainly see a new landscape based on the current political situation,” he told reporters after launching the Melaka state Umno machinery to face election here today.

According to Ahmad Zahid, all the state constituencies are hot seats, and the party is currently focusing on looking for winnable candidates in the polls.

He said this was being done based on scientific analysis and statistical data from the 13th and 14th General Elections as well as projections made by the party for the state.

“We will place our election machinery in every seat contested by Umno and BN,“ he said, adding that Umno would work hard for the victory of BN candidates.

Yesterday, Election Commission (EC) chairman Datuk Abdul Ghani Salleh announced that the Melaka State Election would be held on Nov 20, with the nomination of candidates on Nov 8 and early voting on Nov 16.

The election is being held following the dissolution of the Melaka state assembly after the BN-led state government lost its majority.- Bernama