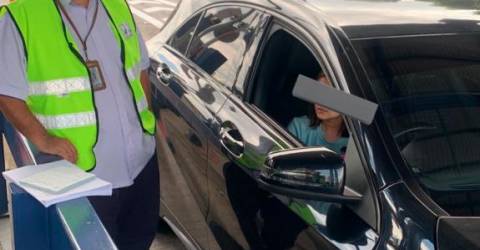 A WOMAN was detained at a toll plaza for missing out on toll payments 45 times by Prolintas AKLEH personnel.

Prolintas staff discovered that the woman, driving a luxurious Mercedes Benz A Class, had avoided paying the toll fare for a total of 45 times, amounting to RM275.65 which she had to pay on the spot.

“It is 2023 already and their attitudes have not changed. More drivers who have not paid for their toll fares have been caught.

“45 times skipped paying toll fees, the arrears of RM275.65 were settled immediately,” Prolintas AKLEH said in their Twitter post calling the woman out.

Prolintas urged road users to not imitate the ‘immoral action’ and pointed out that not only the driver’s actions constitutes trespassing but also endangering other vehicles on the road.

Netizens condemned the Mercedes driver’s actions but were not satisfied with the punishment for absconding toll fees 45 times.

“I was penalised RM40 as penalty fees for a faulty toll gate but this driver had missed out paying 45 times and not get penalised?” a netizen commented.

“Actually vehicles who skip the toll fares need to pay up triple the amount for instance,” a netizen suggested.

“So if we skipped paying toll fees, we would not get fined? We just pay what we owe only? No wonder so many drivers are brave enough to do this,” a netizen pointed out.