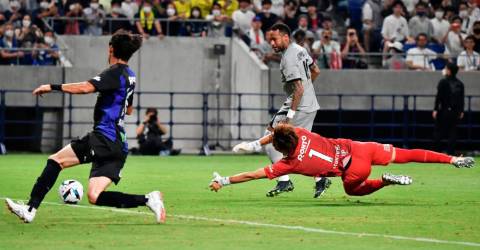 OSAKA: Lionel Messi and Neymar combined to devastating effect as Paris Saint-Germain thrashed Gamba Osaka 6-2 on Monday to finish their pre-season Japan tour with three wins out of three.

The star forwards both played the opening 70 minutes in Osaka and Neymar scored a first-half penalty before setting up a goal for Messi.

Messi then returned the favour in the second half, releasing Neymar for the Brazilian to notch his second goal of the game.

Kylian Mbappe got his name on the scoresheet with a late penalty after coming on for the final 30 minutes.

Pablo Sarabia and Nuno Mendes also scored for PSG, who now head to Israel to play Nantes in the French Super Cup in Tel Aviv on July 31.

Gamba goalkeeper Masaaki Higashiguchi frustrated PSG’s stars early in the game, first denying Messi and then keeping out Neymar with the Brazilian clean through on goal.

The French champions found a way through in the 28th minute after a defensive mistake gave the ball to Messi, whose saved shot fell nicely for Sarabia to slam home.

Neymar made it two just minutes later, rolling his penalty to the goalkeeper’s left after the Brazilian forward had been brought down in the box.

Gamba hit straight back when Keisuke Kurokawa bundled the ball home after Gianluigi Donnarumma had initially kept out the Japanese side with a sharp reflex save.

Mendes restored PSG’s cushion after controlling a pass from Vitinha and smashing the ball past the goalkeeper.

Messi made it four after Neymar picked him out in the box to turn the ball home.

Neymar scored his second in the 60th minute but Gamba kept PSG on their toes, Hiroto Yamami turning the ball home in the 70th minute.

Mbappe added the final touch for PSG with a penalty in the 86th minute. – AFP