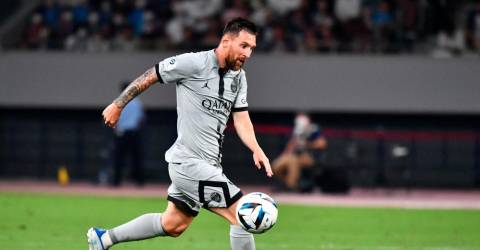 TOKYO: Lionel Messi(pix) scored but Paris Saint-Germain were made to work hard for a 2-1 win over Kawasaki Frontale on Wednesday in the first match of their pre-season Japanese tour.

Star forwards Messi, Neymar and Kylian Mbappe all started in new PSG manager Christophe Galtier’s first game in charge of his full squad in front of a crowd of 65,000 at Tokyo’s National Stadium.

Messi opened the scoring with a 32nd-minute shot but a much-changed PSG line-up in the second half could manage only one more goal through substitute Arnaud Kalimuendo.

J-League champions Kawasaki pulled a goal back in the 84th minute when Kazuya Yamamura headed home unmarked to set up a nervy finish.

PSG will play two more J-League sides on their Japanese tour, taking on Urawa Reds in Saitama on Saturday and Gamba Osaka in Osaka the following Monday.

PSG had most of the early possession but the first real chance fell to Kawasaki.

A pass forward split the PSG defence and released striker Marcinho, only for the Brazilian to put the ball wide with the goal at his mercy.

Kawasaki goalkeeper Jung Song-ryong denied Mbappe a minute later after Messi had played him in on goal.

Kawasaki’s Chanathip Songkrasin — nicknamed the “Thai Messi” — then cleared a shot from his Argentine namesake off the line to keep the game scoreless.

But Messi found a way through shortly after, guiding a shot into the corner from just inside the box.

Neymar and Mbappe departed at half-time and Kawasaki forward Kei Chinen missed a glorious chance to equalise when he blazed over the bar in the 50th minute.

Messi bowed out soon after as Galthier, newly arrived from Nice, rung the changes.

Substitute Kalimuendo doubled PSG’s lead when he turned home Juan Bernat’s low cross in the 58th minute, before Yamamura pulled one back with six minutes left to play.-AFP