Meteoroid that skimmed Earth’s atmosphere at 35,000 miles per hour and flew back into space is a rare example of a ‘grazing fireball’, scientists claim

By Ian Randall For Mailonline

A meteoroid that skimmed across Earth’s atmosphere at more than 35,000 miles per hour before flying back out into space was a rare example of a ‘grazing fireball.’

The 808 mile (1,300 km) -long fiery trail formed by the space rock as it began to burn up in the atmosphere was spotted over Australia in the July of 2017.

Only a limited number of such events have been scientifically observed — including a procession of meteors seen in 1860 — with the latest notable for its low altitude.

Scroll down for the video

A meteoroid, pictured from four viewpoints, that skimmed across Earth’s atmosphere at more than 35,000 miles per hour was a rare example of a ‘grazing fireball’

This is the largest meteoroid-tracking network in the world — which covers 64.7 million square miles (2.5 million square kilometres), or a third of the Australian skies — with its set of 50 autonomous cameras.

‘The meteoroid transited the atmosphere for over 90 seconds and reached a minimum height of 58.5 km before returning to interplanetary space,’ the researchers wrote.

Based on its trajectory as it skimmed the atmosphere, the team estimate that the rock was around 12 inches (30 centimetres) across and likely weighed at least 132 pounds (60 kilograms).

The meteoroid — a fragment of which broke off as it seared across the sky — was slowed by around 0.9 miles (1.5 kilometres) per second in the atmosphere, before receiving a boost in from the ‘gravitational slingshot’ as it shot away from the Earth.

This is the same phenomenon that engineers use to give space probes as a boost as they travel out past the planets in our solar system.

Thanks to this acceleration, the rock — while is believed to have originated in the asteroid belt between Mars and Jupiter — will now travel out as far as the latter.

The astronomers believe that the body will remain in this new orbit for some 200,000 years before either being pushed out further or ejected from the solar system completely.

The 808 mile (1,300 km) -long fiery trail formed by the space rock as it began to burn up in the atmosphere was spotted over Australia in the July of 2017. During its passage, a fragment broke off and assumed a different trajectory, as pictured 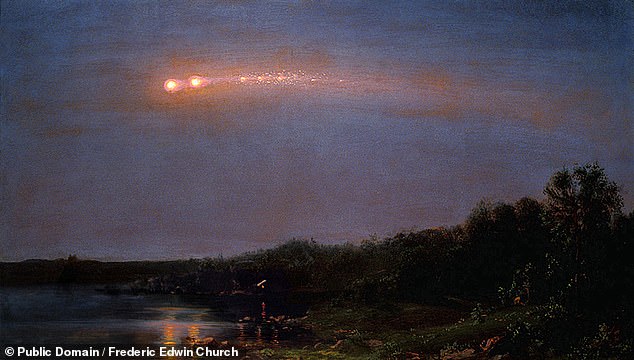 Only a limited number of such events have been scientifically observed — including a procession of meteors seen in 1860, depicted here in this painting by Frederic Edwin Church — with the latest notable for its low altitude

‘This (grazing fireball) really was quite unusual,’ meteor expert Peter Brown of Canada’s Western University who was not involved in the present study told the New Scientist.

‘It’s an exquisite experiment in seeing how strong these objects are,’ he added, explaining that studies of the rocks before and after they burn through our atmosphere can help us learn how strong they are.

A pre-print of the researchers’ article, which has not yet been peer-reviewed, can be read on the arXiv repository.

WHAT ARE THE DIFFERENT TYPES OF SPACE ROCKS?

An asteroid is a large chunk of rock left over from collisions or the early solar system. Most are located between Mars and Jupiter in the Main Belt.

A comet is a rock covered in ice, methane and other compounds. Their orbits take them much further out of the solar system.

A meteor is what astronomers call a flash of light in the atmosphere when debris burns up.

This debris itself is known as a meteoroid. Most are so small they are vapourised in the atmosphere.

If any of this meteoroid makes it to Earth, it is called a meteorite.

Meteors, meteoroids and meteorites normally originate from asteroids and comets.

For example, if Earth passes through the tail of a comet, much of the debris burns up in the atmosphere, forming a meteor shower.