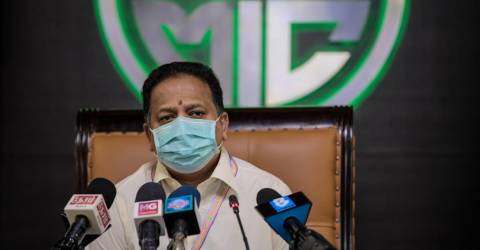 The results were announced by MIC president, Tan Sri S A Vigneswaran (pix), after the three-hour-long nomination process closed at 1 pm at the party headquarters.

Raven, 38, previously served as Putera MIC chief from 2015 to 2018, replacing R Thinalan, who did not defend his post.

Meanwhile, former Wanita chief Datuk Mohana Muniandy, who served from 2013 to 2018, will take on incumbent J Usha Nandhini for the top women’s position in the party.

Mohana, 45, did not defend her position in 2018, but re-emerged to mount a challenge this time around.

In addition, Puvaneswary Rajaram, 34, was announced as Puteri MIC chief after winning uncontested, replacing CM Hemalatha, who also chose not to defend her position.

The party wings’ elections are scheduled for Oct 30.

Nominations of candidates for the top positions in the party, including MIC central working committee members, will take place on Nov 19, while elections will be held on Nov 26.

Raven, when met by reporters, pledged to improve the standard of living for Indian youth in the country, especially through education, sports, and culture.

“We will also focus and assist government efforts in implementing Undi18,” he said.-Bernama