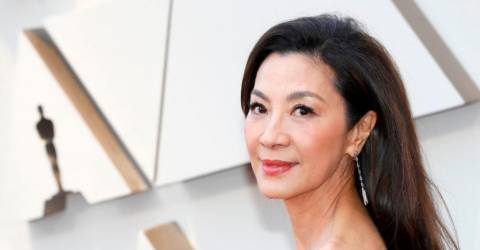 AFTER being named TIME magazine’s Icon of the Year, Malaysia-born actress Michelle Yeoh is embracing the love she is getting at a critical juncture of her career.

The actress is being considered a Best Actress frontrunner at the upcoming Academy Awards for her performance in Everything Everywhere All at Once.

Yeoh has thus far taken home best-actress accolades from the Saturn Awards and Hollywood Critics Association for her role in the movie, and was nominated for outstanding lead performance at the Gotham Independent Film Awards.

She is also up for best lead performance at the Film Independent Spirit Awards, which will be held in March next year.

Of the potential golden statuette, Yeoh said she definitely wants it but that her desire for the recognition is “not about needing it”, but rather for the “love from other people”.

Yeoh said she has “thought about” the fact that no Asian woman has ever won Best Actress at the Oscars, and how she feels like it’s something the Asian community has thought about.

“When you get an opportunity like this, you have to pour your heart and soul into it, because you don’t know when the next chance is,“ Yeoh explained of her role in Everything Everywhere All at Once.

“I think that is my biggest fear: Please don’t let this be the one and only.”