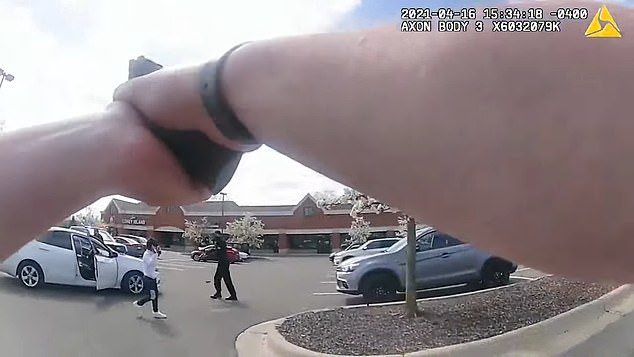 A furious black mom is suing a Michigan police department for pointing a gun and handcuffing her 10 year-old son after his dad was apprehended by cops.

‘I’m scared,’ the visibly frightened child can be heard telling the Pittsfield Township officer while getting handcuffed, in footage recorded from the officer’s person during the April 16 incident.

The altercation, which saw the boy’s dad filmed screaming over how his son was treated, has since become the focus of a federal lawsuit filed by the boy’s mother.

It came after the boy’s father was ordered by cops to drive away from the scene of a shooting that had been cordoned off by police. He drove down the wrong side of a road, sparking a police response. A 100mph chase then ensued, with the dad and his son both restrained after officers finally apprehended their white Dodge car.

The suit, filed in a Michigan US District Court on October 5, argues that the Pittsfield Township officer, who has not been formally identified, caused ’emotional injury’ to the youngster during the April 16 traffic stop, and is asking for $400,000 in damages.

A Michigan cop is in hot water for pointing his gun at a 10-year-old black boy after the child’s father fled from police during a traffic stop, in an encounter that was caught on the lawman’s bodycam

‘This changed everything about him,’ the boy’s mother, Makia Dixson, said in an interview Tuesday with local outlet CW50 Detroit at a ‘Black Boys Matter’ protest was held in Pittsfield Township.

Dixson told the outlet that prior to the terrifying encounter with the officer last spring, her son was a happy and outgoing – but revealed that the boy is now a shell of his former self, traumatized by the incident.

‘He sits in the house all the time now,’ Dixson said

‘He really doesn’t want to go outside.’

In the 12-page filing, Dixson alleges the officer violated the civil rights of her son when he pointed his loaded service weapon at him and put him in handcuffs – while the boy trembled and desperately clutched his phone. 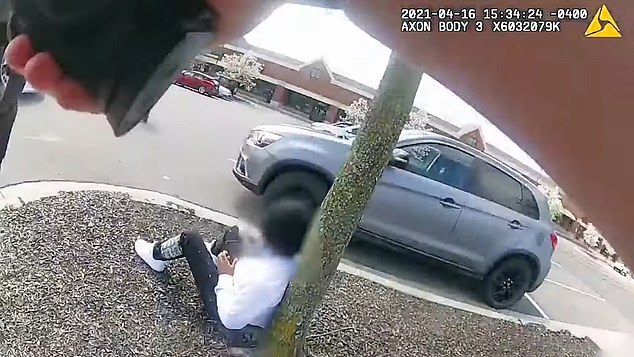 ‘I’m scared,’ the visibly scared child can be heard telling the Pittsfield Township officer while getting handcuffed during the April 16 incident

Dixson’s attorney, Dionne Webster-Cox, added to CW50 during the congregation of about a dozen protesters that the officer mishandled the situation after the child’s father was pulled over near I-94.

‘Get down, get down, do this, giving all these demands, put the phone down,’ Webster-Cox told the outlet Tuesday, citing the body camera footage that the family released to the public amid the ongoing suit.

‘The boy is so visibly shaken you can see his hands, he sits down, then he makes up stand back up and puts him in handcuffs.’

The altercation began after a reported shooting at Briarwood Mall in Ann Arbor, with the Pittsfield Township officer being one of several police personnel to respond to the call. 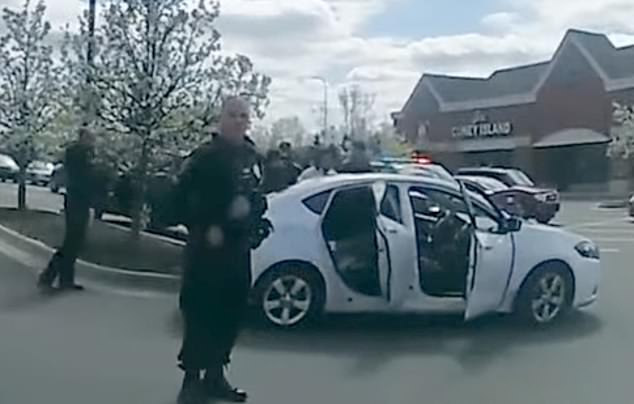 Minutes after handcuffing the boy, officers apprehended his father, who had fled the scene. While being restrained, he can be heard asking officers in the body camera footage, ‘Why the f**k do you have my son in handcuffs?’

Webster-Cox says that police then honed in on the car carrying Benjamin and his dad, who were driving near Briarwood Mall.

According to the attorney, police had shut down a road nearby due to the investigation, and the boy’s father drove in the opposite direction of where police told drivers to go.

However, the attorney added that the department later deemed the stop a case of ‘mistaken identity.’

A chase then ensued, with Pittsfield police saying the fleeing vehicle exceeded speeds of 100 mph.

The boy’s father, who has not been named, was subsequently pulled over eight miles from where the chase started, and fled the scene – leaving his son behind. 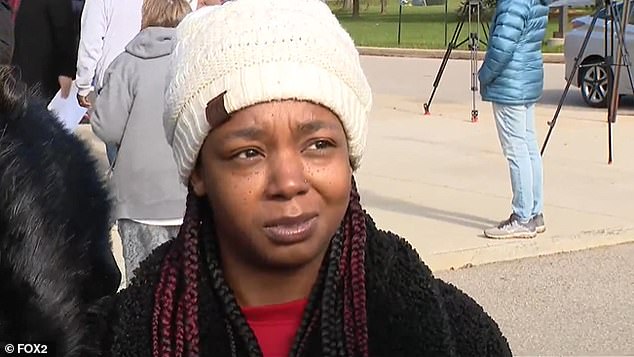 The altercation has since become the focus of a federal lawsuit filed by the boy’s mother, Makia Dixson, who is seeking $400,00 in damages for her son’s ’emotional injury’

The footage captured from the officer’s body camera shows the lawman pointing his service weapon at the boy, who is visibly shaken, and proceeds to handcuff him.

‘Lay down. Lay down. Put the phone down,’ the officer can be heard saying.

As the officer cuffs the child, he appears to notice how young and overwhelmed by the situation he is.

‘I’m scared,’ he tells the officer.

Moments later, the boy’s father, apprehended by police, is brought back to the scene and also cuffed.

While being restrained, he can be heard asking police why his son is handcuffed as well.

‘That’s my f***kin son!’ the father shouts while being stuffed into a squad car.

‘Why is he handcuffed? Why the f**k do you have my son in handcuffs?’

In the footage, the officer then walks the boy into one of the many police vehicles at the scene, and seems to question him.

Webster-Cox says it’s a violation to question a minor without a parent present, and argues that the officer’s actions were unprofessional and dangerous, going against department’s established practices.

After approximately two minutes, another officer tells the lawman to uncuff the child.

During the Tuesday protest, the child’s mother joined civil rights activists in front of the Pittsfield municipal offices to object against the township for not disciplining the officer, who is still on the job.

‘We are tired of our children being victimized and being brutalized in our streets,’ Dixson said.

Attorneys for the family concede that the boy’s father was wrong for not initially pulling over for police.

However, they say the subsequent altercation left Benjamin traumatized – hence why they are seeking a $400,000 payout from the Pittsfield police department, which is comprised of only 40 officers.

DailyMail.com reached out to the department to ask about their officer’s actions, but they did not immediately reply to the request for comment.