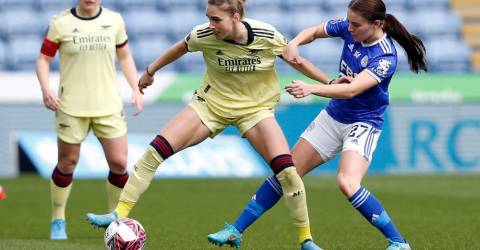 LEICESTER: Vivianne Miedema struck twice in the second half as Arsenal beat Leicester City 5-0 to return to the top of the Women’s Super League on Sunday, but title rivals Chelsea can bump them back down to second if they beat Reading later in the evening.

Beth Mead gave the Gunners an early lead but second-from-bottom Leicester put up stiff resistance until midway through the second half, when Dutch striker Miedema netted a brace in eight minutes.

An own goal and an opportunist strike from Tobin Heath rounded out the scoring.

Arsenal topped the standings with 43 points, two points above Chelsea ahead of their showdown with Reading. Both teams will have four league games left to play after Sunday.

Earlier in the afternoon, Leah Galton got the only goal of the game as Manchester United beat Brighton & Hove Albion 1-0 to re-open a three-point cushion over fourth-placed Manchester City, who beat West Ham United 2-0 on Saturday.

Bottom side Birmingham City battled to a scoreless draw with Everton on Friday. Trailing Leicester by seven points, they look almost certain to be relegated.