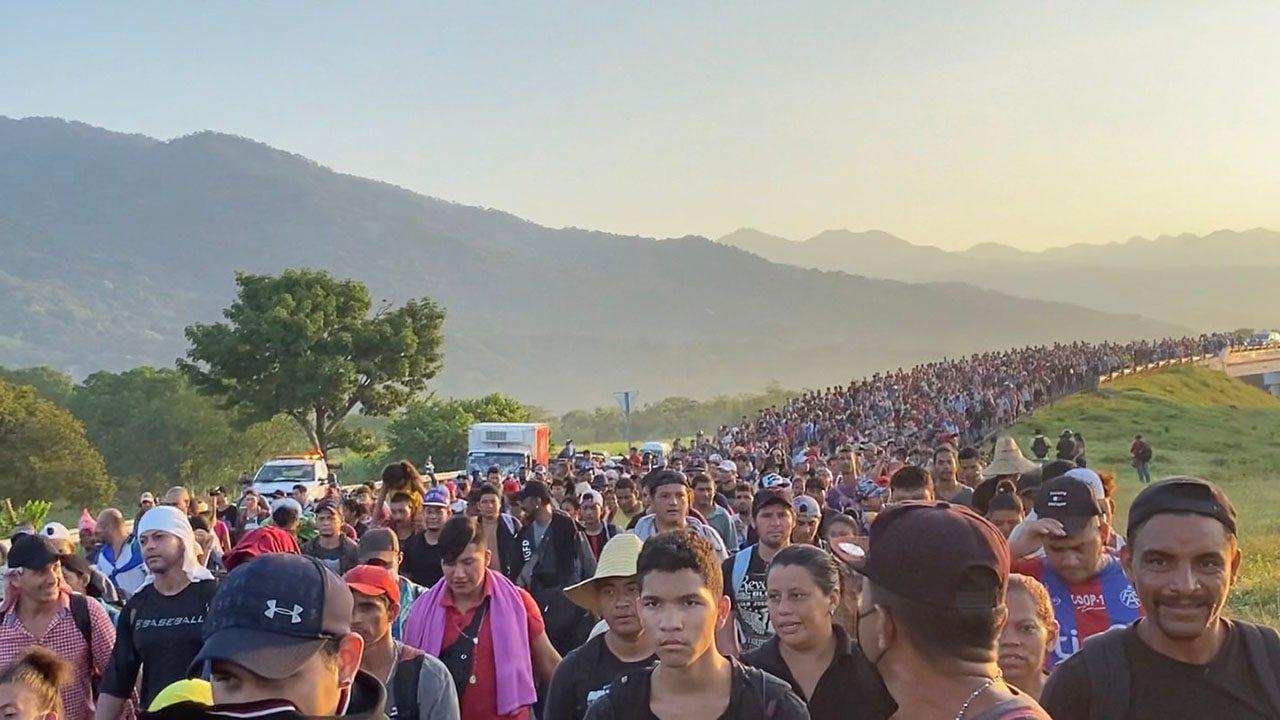 A massive caravan of thousands of migrants has rejected an offer of humanitarian visas for some of the travelers, and is continuing with its journey to the United States border.

The Mexican National Institute of Migration said in a statement that it offered humanitarian visas to women and children in the caravan, but said it was rejected by leaders of the caravan, which set off from southern Mexico last week.

Oct 2021: A woman making up one of the thousands of migrants coming north as part of the migrant caravan.

One of the leaders told Reuters that they were distrustful of the authorities who they said had broken promises to them in the past — and that the deal involved them reporting to government shelters and possibly being moves across states.

The migrants, currently in Ulapa, will leave later Saturday and head to Mapastepec as they walk at night to beat the heat of the day as they take their chances to get into the United States via the southern border — where there were more than 1.7 million migrant encounters in Fiscal Year 2021.

Organizer Luis Garcia Villagran had told Fox News earlier this week that there were approximately 4,000 migrants in the caravan, with 1,256 under the age of seven, over 400 between the ages of seven and 18, more than 100 babies under one and 65 pregnant women.

MIGRANT CARAVAN CONTAINING THOUSANDS TRAVELS THROUGH MEXICO TOWARD US BORDER: ‘TELL BIDEN WE ARE COMING’

While single males are mostly being turned away under the Trump-era Title 42 public health order, the Biden administration has only been turning away a fraction of family units and is not applying Title 42 to unaccompanied children. In September, 75% of single adults were expelled under Title 42, while just 27% of family units were expelled.

The caravan consists of migrants from Central and South America as well as Haiti and other countries. Thousands of migrants predominantly from Haiti overwhelmed the Del Rio sector last month — with 15,000 migrants camped under the bridge at one point.

Unlike the caravans that made headlines in 2019, this one will take considerably longer to get to the U.S. border. The Mexican government has banned truckers from letting migrants hitch a ride, so they will have to walk the entire 2,500 miles to the Texas border. While many caravans are eventually broken up by Mexican authorities, so far this one has kept going. On its first day of travel it broke through a line of Mexican forces set up to stop them.

The caravan comes as the U.S. is in flux in its implementation of the Migrant Protection Protocols — known as the “Remain in Mexico” policy. A federal court ordered the Biden administration to re-implement the Trump-era policy which kept migrants in Mexico as they await their proceedings. The Supreme Court upheld the order.

On Friday, Homeland Security Secretary Alejandro Mayorkas issued a memo again seeking to terminate the program — although he said that the agency would comply with the injunction until it is lifted.