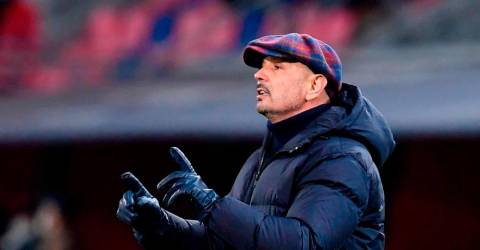 ROME: Sinisa Mihajlovic(pix) was dismissed as Bologna coach on Tuesday after a winless start to the Serie A season, ending a three-year spell in charge marked by his battle against leukemia.

“Bologna can confirm that Sinisa Mihajlovic and the club have parted ways,“ the team said in a statement Tuesday.

“Despite the strong bond that has been created with the club and the city over three and a half emotional and dramatic years, it is a decision that has unfortunately had to be made.”

Mihajlovic, 53, took over at Bologna in January 2019 after spells at the likes of Sporting Lisbon, AC Milan and Sampdoria.

The Serbian was diagnosed with leukemia just before the 2019-20 season and has been in and out of hospital since to undergo treatment and avoid the risk of a relapse.

He had a distinguished playing career in Serie A, winning the title with both Lazio and Inter Milan.

He also won the 1991 European Cup with Red Star Belgrade and the 1999 Cup Winners’ Cup with Lazio.

But Bologna decided to move on from Mihajlovic after failing to win any of their first five matches this term.

“Unfortunately, even positive and successful sporting cycles, like this one has been, lose their initial spark and eventually come to an end,“ the club said.

“To Sinisa and his staff, we would like to give special thanks to the exceptional work they have done showing dedication and professionalism in extraordinary and difficult circumstances.”

According to Gazzetta dello Sport, former Italy midfielder Thiago Motta is among the candidates to replace Mihajlovic, the first coach to be sacked in Serie A this season.-AFP