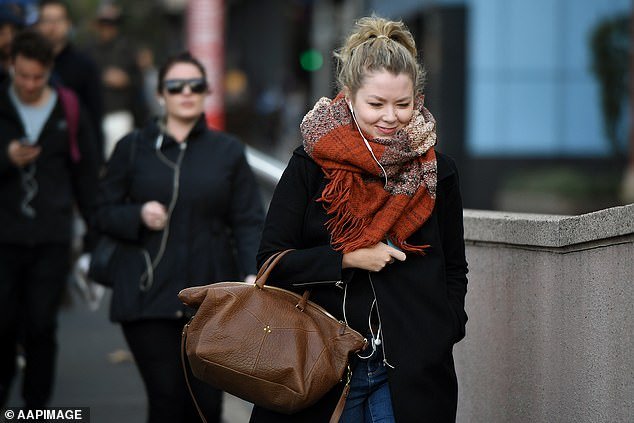 Millions of Australians will shiver through another chilly night as temperatures plummet from a blast of Antarctic air.

Most regions across New South Wales  are advised to rug up on Monday night, where overnight temperatures in some areas will drop below zero as a result of a cold front from Australia’s south-east.

Australia also experienced its first taste of snow for 2021 with parts of Victoria, Tasmania and NSW blanketed in white powder as south-east Queensland woke up to a frosty morning.

The mercury in parts of Sydney will drop into single digits while Canberra will  plummet to a freezing 0C on Monday night.

‘Another chilly one across much of NSW tonight before the current blast of Antarctic air loosens its grip,’ the Bureau of Meteorology tweeted.

‘Many places recorded temps 5 to 7C below average, and the wind chill made it feel even colder. But things warm up somewhat from mid week.’

Bathurst in central-west NSW will get down to 1C, while some parts of the Upper Hunter region such as Scone and Muswellbrook will drop to as low as 4C.

The cold snap saw some areas experiencing temperatures as much as 11 degrees below average on Sunday night as minimum April records were set in several regional areas.

Kempsey on the NSW mid north coast got down to 2.2C, beating its previous April low of 3C, well below the minimum April average of 13C.

Tamworth in the state’s north-west recorded -0.5C, which is colder than the previous April record of -0.2C.

Canberrans also shivered through their coldest night in eight months after -2.6C was recorded at the airport. 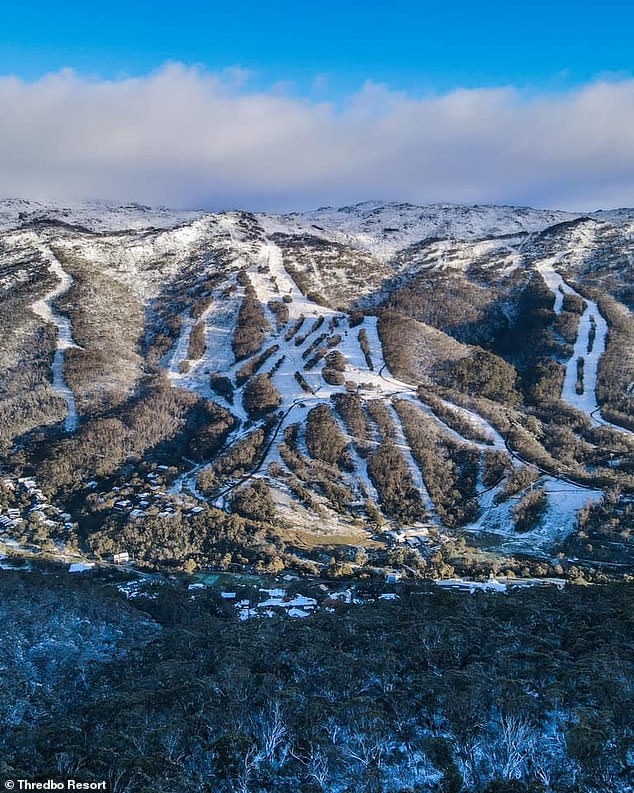 Australia has had its first taste of snow for 2021 in Tasmania, Victoria and NSW. Pictured NSW ski resort Thredbo on Monday 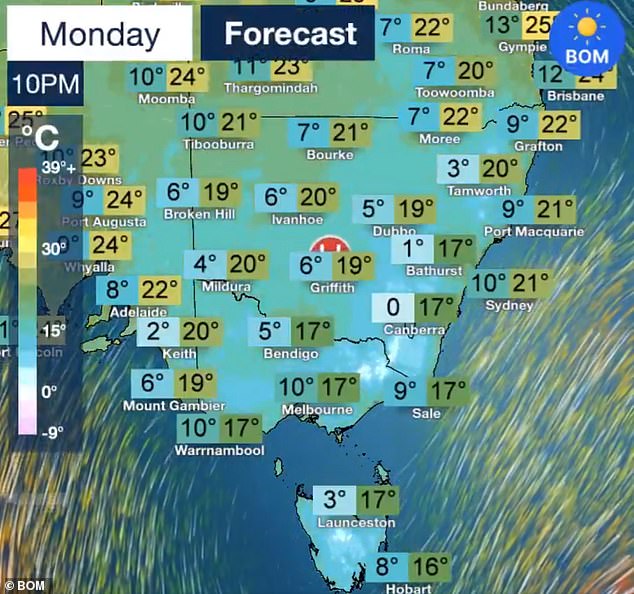 The cold front moved in over Tasmania, Victoria and South Australia on Saturday, bringing freezing conditions, low-level snow, heavy swells and the first frost of the year.

Melbourne on Sunday woke to its coldest morning since October 20 last year according to the Bureau of Meteorology, with the mercury dipping to 8.3C.

BOM Meteorologist Helen Reid said the cold front has moved to NSW from Victoria, bringing snow to the alpine regions of both states and chilly winds for most of NSW.

The wind chill factor in many places, including Sydney, has made conditions feel even colder. 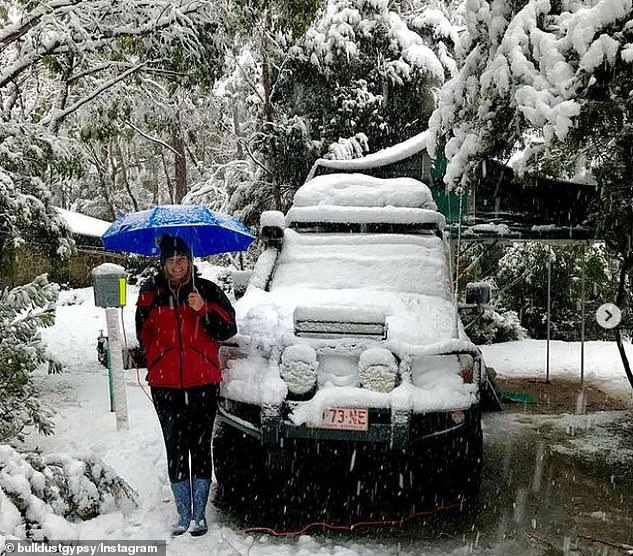 An image posted to social media on Sunday from Cradle Mountain, Tasmania with the caption ‘We woke to the most beautiful winter wonderland this morning’ 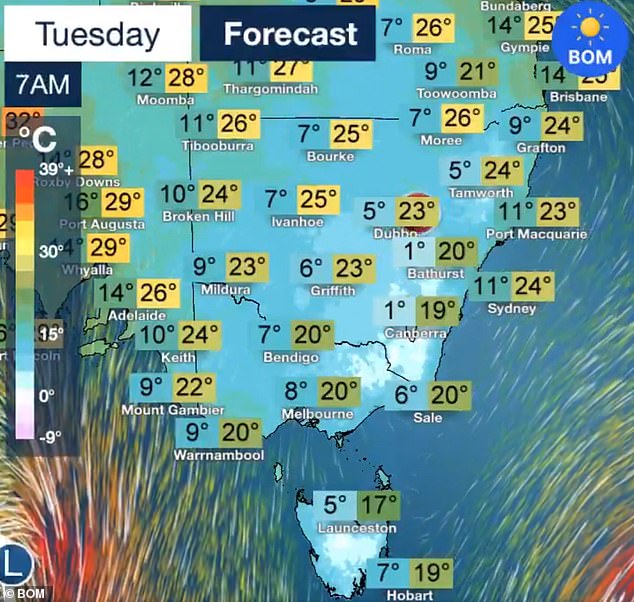 ‘We did see just a little dusting for most of the resorts through (the NSW Snowy Mountains) … we don’t expect it to last very long, we don’t have much snow there at the moment.

‘We wouldn’t want to say it’s the start of the ski season but it’s just a teaser of what winter may hold.

The bureau says the cold snap will be short lived, with temperatures likely to lead to frost in a number of areas on Tuesday before warmer temperatures return on Wednesday.

More regular April temperatures are likely to return by Wednesday, while another cold front is expected to arrive later this week. 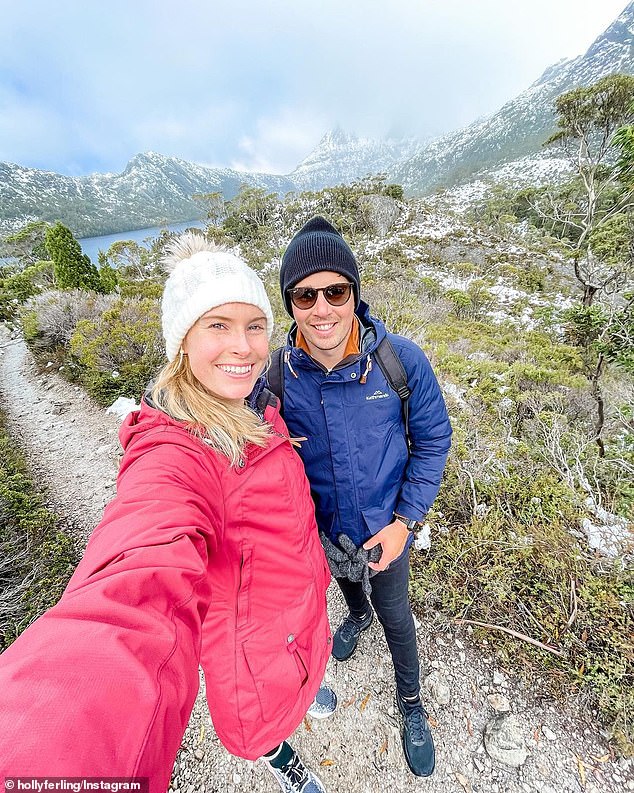