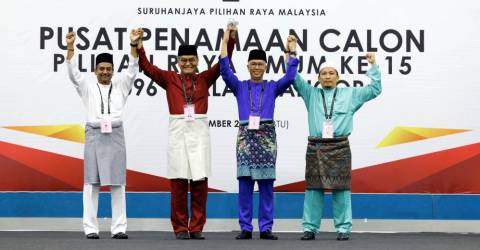 SHAH ALAM: In addition to candidates with ministerial status, the 15th General Election (GE15) in Selangor is also witnessing the emergence of community activists and local film industry practitioners contesting for the parliamentary seats in the state.

Among the focus is the presence of Health Minister Khairy Jamaluddin who previously held the Rembau parliamentary seat in Negeri Sembilan. However, this time he is to represent Barisan Nasional (BN) in the Sungai Buloh parliamentary seat.

Also in the spotlight was the debut appearance of Finance Minister Tengku Datuk Seri Zafrul Tengku Abdul Aziz, who has a banking and corporate background, in the political arena as a BN candidate to contest the Kuala Selangor parliamentary seat.

One of his rivals is former health minister Datuk Seri Dr Dzulkefly Ahmad from the Pakatan Harapan (PH), who is also the incumbent Member of Parliament for Kuala Selangor.

Meanwhile, a community activist who has frequently highlighted the issue of potholes, and the founder of Ikatan Silaturahim Brotherhood, Azlan Sani Zawawi, better known as Lando, has also entered the political arena, to contest the Tanjong Karang seat, representing Pejuang.

Another community activist Kuan Chee Heng or ‘Uncle Kentang’ will also try his luck in GE15 in the Puchong parliamentary constituency as an independent candidate. Kuan previously contested in the Semenyih state seat by-election in 2019.

Also attracting attention is the appearance of actor-producer-director Datuk Seri Eizlan Yusof or real name Datuk Seri Idris Md Yusof to contest as a Pejuang candidate in the Sabak Bernam parliamentary seat, and another film producer S. Surendhar who is contesting on an independent ticket in Kota Raja.

Incumbent Member of Parliament for Ampang Datuk Zuraida Kamaruddin from Parti Bangsa Malaysia (PBM), who is also Minister of Plantation Industries and Commodities, will be involved in a nine-cornered clash to defend her seat, which is also the most contested seat in Selangor.

The Election Commission (EC) set Nov 19 as the polling day and Nov 15 for early voting. – Bernama