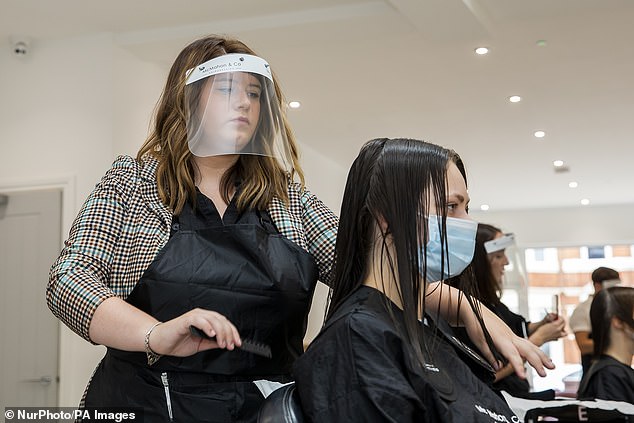 Hairdressers could be passing on coronavirus to their clients as there are fears the plastic face visors are ‘inadequate’, experts have warned.

Scientists have raised concerns that the plastic face shields worn by barbers and hairdressers might not be providing suitable protection.

They fear that the significant gap could still allow virus-laden droplets to enter the mouth, The Sun reported.

Ministers are facing calls from scientists to make it compulsory for staff at barbers and hairdressers to wear face coverings or masks, with or without a visor.

They also voiced their personal protective equipment fears during a recent meeting of at least one sub-committee of the Scientific Advisory Group for Emergencies (Sage), the Daily Telegraph reported.

NHS staff and healthcare workers do not use visors without also wearing face mask, which covers the nose and mouth.

Prof Mark Wilcox, a professor of medical microbiology who attends Sage and two of its sub committees, said: ‘I don’t think the guidance is correct and I don’t understand why visors were chosen in preference to masks.

‘We have, in several settings, discussed the issue of masks versus visors and I think it would be fair to say that I am not alone in these views. My colleagues both in those settings and in other settings share my views.

‘I’ve not come across somebody who has said that visors are the best thing.’ 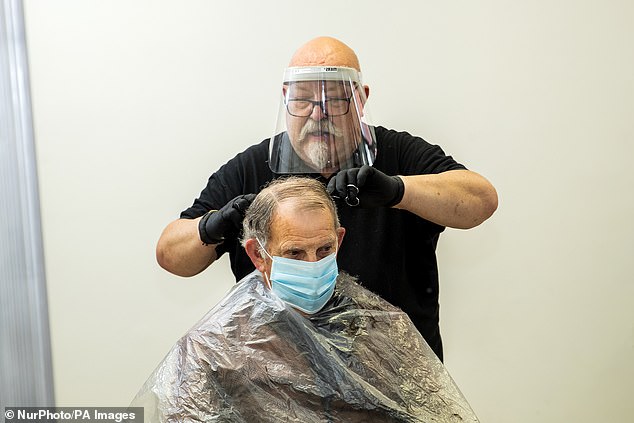 Dr Ben Killingley, a consultant in infectious diseases who sits on Nervtag, said: ‘A visor is primarily worn to protect workers from splashes. It does the same job as goggles, protecting the eyes. No healthcare worker would ever wear a visor without a mask.

‘You would have thought for their own protection and just in case they have been infected themselves, they should be wearing a mask themselves.’

The NHBF, the trade body for hairdressers, beauty salons and barbers, says on its website that face coverings should not be worn instead of a visor.

The NHBF, who rely on Government guidance for advice about PPE, said: ‘Clients may wear face coverings if they wish and staff can wear a face covering in addition to a visor, but not instead of one.’

Swiss officials investigated an outbreak of ‘several’ coronavirus cases that occurred at a hotel in a village in the Alps — even though employers took precautions. 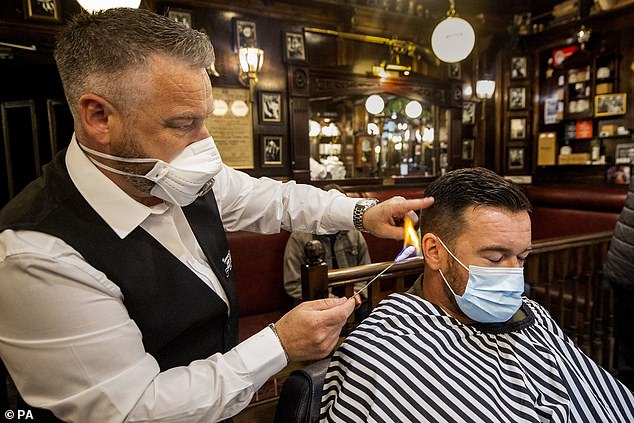 In the UK, it is not currently a compulsory requirement for hairdressers or barbers to wear additional personal protective equipment other than a visor

Experts revealed only those who wore plastic visors were infected. But no-one who wore a mask, either alone or in addition to a face shield, caught the coronavirus, according to the study.

The hotel outbreak occurred in the village of Pontresina, Graübunden region, where several employees and at least one guest tested positive for the virus.

Local health officials determined that all those infected had been relying solely on a face shield to protect themselves.

The Federal Office of Public Health, the Swiss government’s health agency, said: ‘Visors are no substitute for a face mask.

‘They protect the eyes from possible infection through droplets, but the possibility of infection via the nose or mouth cannot be excluded.’

But in the UK, it is not required for hairdressers to wear additional protection other than a visor.

The Department of Health said: ‘There is no requirement for the client to wear any additional protection such as a mask or face covering, when the practitioner is wearing a visor.’ 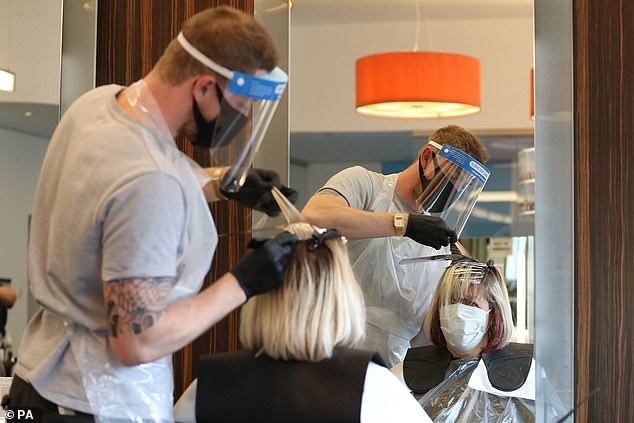 A Government spokesman said: ‘Advice for hairdressers remains unchanged and is that they should continue to wear visors.’

Boris Johnson announced he was ‘squeezing the brake pedal’ on lifting the coronavirus restrictions further on July 31.

The Prime Minister said the scheduled August 1 return of casinos, bowling alleys and close contact services like beauticians has been pushed back to August 15 ‘at the earliest’.

He also extended the compulsory wearing of face masks to most indoor public spaces, including museums in places of worship.

Loosening rules to allow wedding receptions of up to 30 people and a pilot scheme of bringing crowds back to sports venues were also delayed.

After the infection rate doubled in July, ministers and scientists are increasingly weary of a second onslaught of the virus, which is seeing a resurgence in several other countries.

Further lockdown restrictions have also been imposed across the North West, as people have been banned from gathering in other people’s homes or gardens.