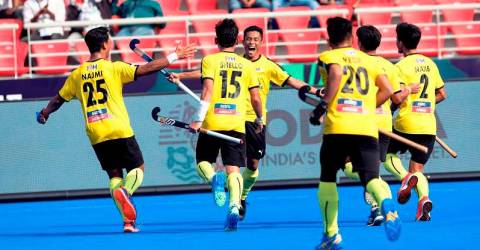 KUALA LUMPUR: National hockey team manager Datuk Mirnawan Nawawi hopes the positive development created by the Speedy Tigers during the 2023 World Cup in Bhubaneswar, India can be translated consistently into victory at the next level.

He said the national men’s squad, who won two Group C matches, must keep the winning streak as a stepping stone to carve another victory against Spain in the quarter-final qualifier tomorrow.

“In terms of the atmosphere, I saw it was positive at the national hockey camp, so I hope the camaraderie can be carried over to the match against Spain later.

“Based on their physical and mental strength, I believe they are ready to overcome the Spaniards,“ he said through a video shared by the Malaysian Hockey Confederation (MHC) with the media today.

Sharing the current progress of the squad, who are now ranked ninth in the world, Mirnawan said the players have been well rested for two days before facing the Spanish team who are ranked world eighth.

“So we have used (the breather) as best as possible for the players to fully recover. They were also allowed to leave the accommodation to soothe their minds and emotions.

“The Speedy Tigers at the same time did field training which focused on the tactical aspects to be used against Spain,” he said.

It was Malaysia’s second win in the competition after defeating Chile, 3-2, thus seeing the national team finish Group C in second spot behind the Netherlands.

Malaysia have played Spain 18 times with the national squad only scoring three wins and two draws while the Spaniards won the rest. –Bernama