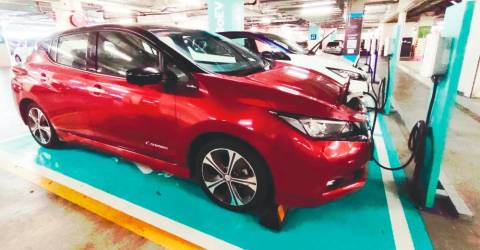 KUALA LUMPUR: The Ministry of International Trade and Industry (MITI) aimed to attract RM20 billion in investments in electric vehicle (EV) by 2025.

“We need to look at the EV ecosystem and the supply chain as a whole and we will also discuss efforts to further strengthen the EV industry through further discussions with the task force,” he said after witnessing the memorandum of agreement (MoA) signing ceremony between Artroniq Bhd and United States (US)-based Beno Inc here today.

He said the EV industry must be viewed holistically, including factors such as software, technical, equipment, engineering and others.

Meanwhile, through the MoA, Artroniq obtains full installation rights for a range of electric bicycle products under the Reevo brand for a period of two years.

The deal is worth more than RM100 million by 2025 and will create more than 100 new job opportunities for Malaysians.

Artroniq chief executive officer Kent Liaw Way Gian said the MoA involved three phases — installation of electric bicycles for the US and European markets; distribution of Reevo products in the Southeast Asian market; and collaboration with Beno in the aspect of research and development of electric motors that would start in the second half of this year.

He said over 95 per cent of the electric bicycles produced by Beno were exported to the US and Europe.

“For the first phase, Artroniq has identified a facility located in Batu Kawan, Penang for the assembly process of the product and we have allocated RM5 million to set up the factory in addition to labor hiring,” he said.

He said the company is expected to produce about 2,000 units of electric bicycles per month, starting March this year, after receiving approval from the company’s shareholders through the annual general meeting to be held in February.

On prospects, he said the ACE Market-listed Artroniq is aiming for the manufacturing segment to contribute as much as 50 per cent to the company’s profits within two-year and reduce its dependence on the information and communication technology (ICT) segment, which is its main activity.

“In the future, we will separate the company’s activities into two, namely ICT and manufacturing, whereby the joint venture with Beno is categorised under the manufacturing branch,” he said.

Artroniq has been actively diversifying its business activities since last year when the company collaborated with Cambodia’s digital bank, Panda Commercial Bank PLC, to provide services and consulting in the research and development of blockchain-based financial services for the bank. – Bernama