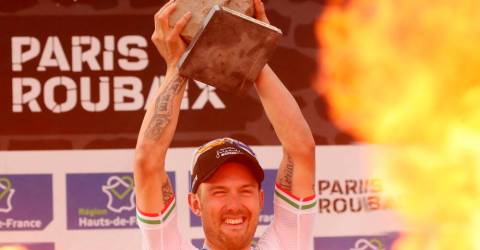 PARIS: Italy’s 2021 Paris-Roubaix victor Sonny Colbrelli said on Sunday he is sad to have to retire but grateful to have been given a “second chance” after suffering cardio-respiratory arrest in March.

The 32-year-old Bahrain Victorious rider collapsed after finishing second in the first stage of the Tour of Catalunya on March 21 and underwent a successful operation 10 days later.

However, having had a defibrillator fitted the decision has been taken for him to cease competitive riding.

“It’s my life that I want to be grateful for, a life I risked losing and which gave me a second chance,“ he said in a statement.

“That of being here today, to remember that I came out of the Hell of the North (Paris-Roubaix) as a winner, and I did it in a legendary way, which will remain in history and that I will be able to continue to tell my children.”

Colbrelli — who retires with 34 victories to his name — said thoughts of prolonging his life with his family and friends overrode any regrets he would have.

“It is to them, my family and all the people closest to me that I owe this new life of mine,“ he said.

“From them, I am drawing the strength to accept this moment of my sporting career that sees me here today to give up being able to add to my (honours) a victory in a Grand Tour or Flanders, a lifelong dream.”

Colbrelli, who will continue to work for Bahrain in an ambassadorial role and with the performance group, said he had accepted even before Sunday that his hopes of returning to the circuit were slim.

“After what happened at Catalunya, the hope of being able to continue being a professional rider has never abandoned me, albeit minimal,“ he said.

“I knew that the way back would be difficult with a defibrillator. In Italy, it is not allowed by law.

“I say goodbye to cycling and try to do it with a smile for the good it gave me, even if it hurts to say goodbye after a season like last year.” – AFP