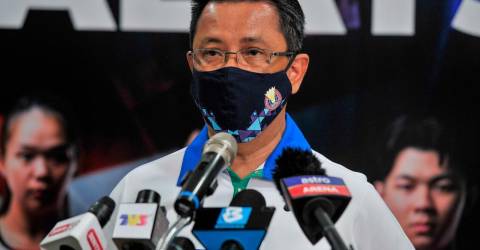 The players Mohamad Norza referred to are national singles’ player Lee Zii Jia as well as doubles pair of Aaron Chia-Soh Wooi Yik who were depended on to collect points in the quarter-finals against Indonesia.

He was however satisfied with Malaysia in meeting the last eight target in the prestigious tournament, said the failure of Zii Jia and Aaron-Wooi Yik proved the young national players are still plagued with the issue of consistencies in their games.

“Secondly, in terms of mental and physical strength. We are seeing from the start of Sudirman Cup to Thomas and Uber Cup and later the Danish Open next week, in terms of their perseverance and sustainability, the sport science (staff) and coach must look into it,” he said.

He was speaking to reporters after attending the SEA Games Federation (SEAGF) meeting online at Wisma OCM here today.

In the quarter-finals last Friday, Malaysia lost 0-3 to traditional enemies Indonesia and failed to avenge the 2018 loss to the same opponents at the same stage.

The results saw Malaysia having to wait longer to end of the Thomas Cup drought for almost 30 years since winning the last edition in 1992 in Kuala Lumpur while the last time the national squad advanced to the final was in 2014 in India.

Taking the aspect of stamina and mental resilience of Indonesian singles player, Jonatan Christie whom Mohamad Norza hoped the national squad could emulate in achieving his level.

“As we could see Jonatan Christie played almost every day (in Aarhus) for almost one hour but he could still maintain and deliver the point. I think my players should be groomed to be like that,” he said.-Bernama