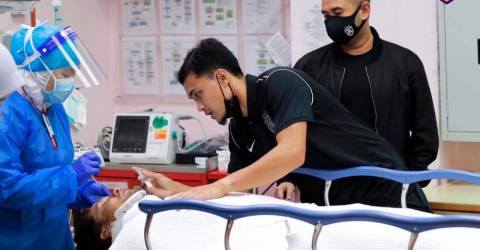 According to a post on the Southern Tigers Facebook page, Mohd Farizal, who is also the national squad’s first choice goalkeeper, however, will remain under observation, besides having to undergo several tests at the hospital he is warded in.

Mohd Farizal’s injury was due to a collision with teammate Shane Lowry when he tried to save a cross from TFC midfielder Muhammad Syafik Ismail in the 61st minute.

Mohd Farizal who seemed to be unconscious had to be stretchered out of the pitch and reserve goalkeeper Muhammad Haziq Nadzli was brought in to replace him.

The Southern Tigers won 2-1 against TFC through Bergson da Silva’s headers in the seventh and 33rd minutes while TFC’s equaliser was netted by Kpah Sherman in the 31st minute.

The result helped the team maintain a perfect start after four matches to lead in the Super League standings. – Bernama