By Andrew Court For Dailymail.com

A Colorado mom is getting revenge on porch pirates who have been stealing packages containing her daughter’s diabetes medication from outside of her home.

Christine Hyatt, of Colorado Springs, has started to fill empty cardboard boxes with trash before taping them up and leaving them on her front porch.

Believing that the boxes contain valuable goods, thieves take off with the packages, leaving Hyatt to revel in her cunning counterplay.

‘This is my way of fighting back,’ she told KKTV11 on Thursday.

‘My daughter can’t afford to have her own medication stolen just because people are jerks!’

The family has been the victim of porch pirates more than 20 times, and the situation leaves her daughter in danger as she’s often deprived of essential medications.

Hyatt says she came up with the clever way of getting back at the thieves late last month.

‘We forgot to set our trash out for Thanksgiving, so we were overflowing with trash. I’ve had packages stolen and I went, ‘You know what? I have extra boxes — let’s see if someone will take our trash!”

Sure enough, after taping up the boxes to resemble freshly-delivered Amazon packages, Hyatt successfully duped the porch pirates.

She has already left three full boxes of trash out on her front porch, and all of them have been taken by the thieves. 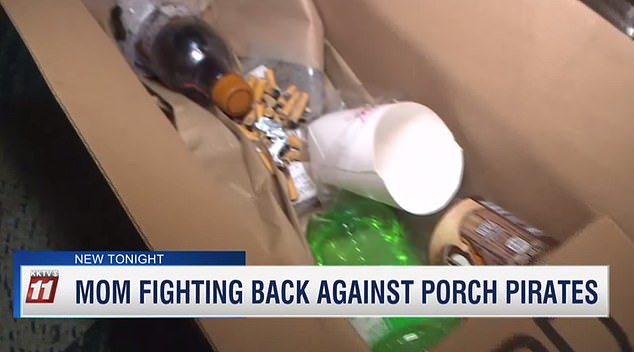 Hyatt loads up the boxes with empty takeout containers, cigarette butts and even kitty litter 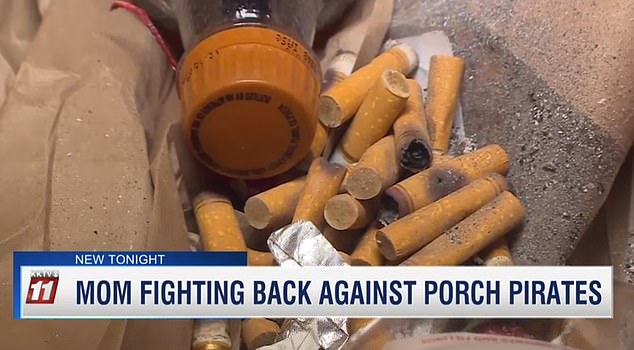 ‘My daughter told me that it was gross,’ Hyatt said. ‘But they [porch pirates] deserve it.’ 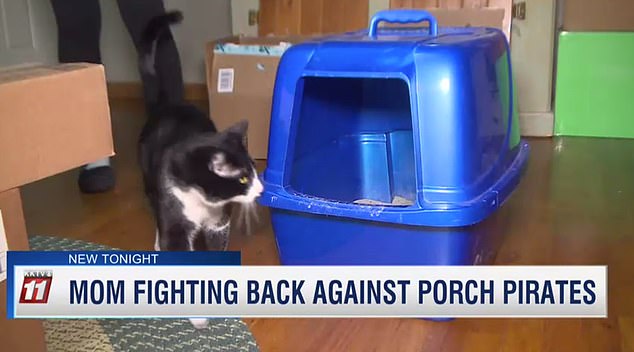 The family cat, Draco Meow-foy (pictured), is even helping to contribute to contents of the packages

Hyatt loads up the boxes with empty takeout containers, cigarette butts and even kitty litter created by the family cat, Draco Meow-foy.

‘If they’re going to steal from me, they get to deal with poo!’ Hyatt told the news network.

‘My daughter told me that it was gross,’ Hyatt said. ‘But they [porch pirates] deserve it.’

As internet shopping becomes more and more popular, the theft of  parcels from outside of people’s homes has become a nationwide epidemic.

The New York Times reports that 90,000 packages are stolen or disappear every single day in the city.

Meanwhile, the city of Denver, not far from Hyatt’s home in Colorado Springs, is one of the worst cities for porch pirates in the nation, according to Patch.

A new report shows 36 percent of Americans had a package stolen at least once in the past 12 months. 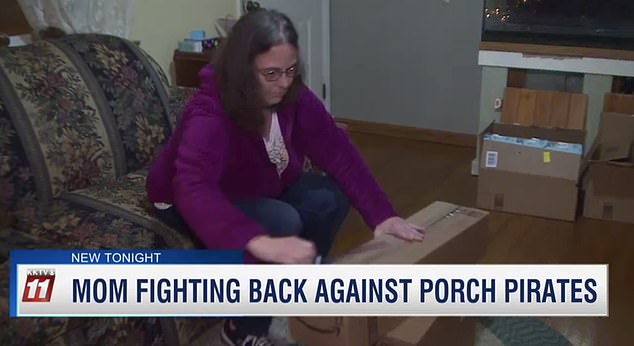