By Jack Elsom For Mailonline

This is the moment ecstatic Conservative activists saw the general election exit poll which put Boris Johnson on course for an emphatic majority.

As the clock struck 10pm on Thursday and the pollster’s forecast was revealed, campaigners in the party’s Milbank calling centre sprang out of their seats and threw their arms aloft.

A massive cheer roared through the packed-out room and hugs and high-fives were exchanged.

The grassroots activists unloaded all the feelings of anxiety pent built up inside them over the last few weeks with the comforting knowledge their canvassing efforts had paid off.

During the campaign, the offices were kitted out with rows of phone banks which party volunteers used to call voters in marginal constituencies in a highly-organised and strategic tele-canvassing operation called ‘connect calling’ – urging people to ‘ring to win’.

But on election night it was the site of jubilation, with Tory faithful partying early into Friday morning.

Anne Perham, who heads up the party’s tele-canvassing, captured the moment of elation and simply tweeted: ‘THANK YOU’. 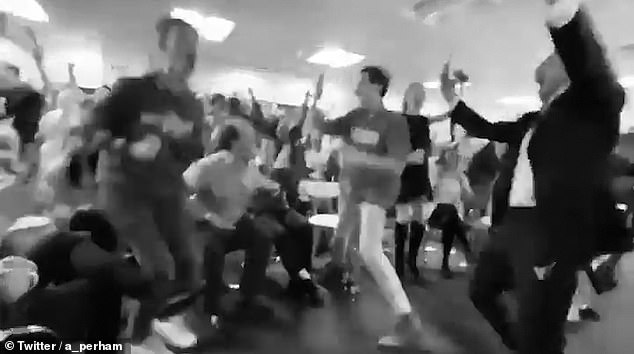 As the clock struck 10pm on Thursday and the pollster’s forecast was revealed, campaigners in the party’s Milbank calling centre sprang out of their seats and threw their arms aloft

Down the road in the Conservative’s main Westminster HQ, party staffers gathered in the war room in nervous wait for the exit poll.

A video seen by MailOnline shows an equal level of celebration with chief strategist Isaac Levido embracing a fellow campaigner.

Exceeding the expectations of many Conservatives, who were braced for a hung Parliament or at best a slim majority, the exit poll predicted Mr Johnson a stonking 86-seat majority, which was eventually shaken down to 80.